‘A Theology of Holiness’ by Alec Goldstein, Kodesh Press 2018 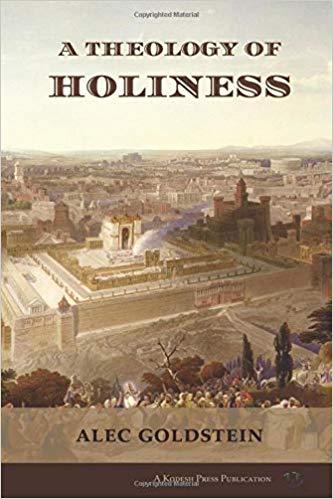 The Jewish people are called upon to be a holy people and to perform holy acts, including specific rituals on holy days, while remaining cognizant that the ultimate setting to serve God and realise their mission as a holy nation is in the holy land. Yet, despite holiness – or in Hebrew, Kedusha – being a central feature of Jewish belief, worship and striving, it is a profoundly misunderstood quality as are the routes towards attaining holiness. For example, is holiness attained by what we do, or what we don’t do? And is holiness a by-product of ritual acts, or are ritual acts simply holy acts?

Naturally, some of these questions are by no means new, and many of the classic Jewish exegetes have directly sought to explain what holiness means. Still, no historical, exegetical and philosophical study has been conducted on the subject and that is based on both the biblical and rabbinic literature on the subject – which is why Alec Goldstein’s A Theology of Holiness is so significant.

In each chapter of A Theology of Holiness which, it should be noted, has been written in a manner that both novice and expert can enjoy, R’ Goldstein – who received his rabbinic ordination from Yeshiva University and who is the founder of Kodesh Press – explores a different dimension of holiness. For example, Chapter 1 analyses the proposed etymologies of the Hebrew root K-D-SH,  Chapter 2 considers the dynamic between holiness and separation, Chapter 5 looks at the Holiness of God and Man, Chapter 6 addresses Holiness of place, time and objects and Chapter 9 explores Holiness as discussed in the Talmud.

While each page in A Theology of Holiness is packed with stimulating analysis and insights – of which I particularly enjoyed the numerous citations of Rambam’s halachic and philosophical works which, often unexpectedly, provided a profoundly nuanced interpretation of holiness – it is the overall picture that emerges from the ten chapters in this book, as summarised in the conclusion, which highlight the achievements of this endeavour. Specifically, that the interpretation of the notion of holiness has shifted over time; that there is a difference between absolute holiness as used with reference to God, and relationship holiness as used in all other instances, and that holiness is a both a fusion of, and a balance between, being separated and elevated.

For some people, all of the above may sound simple. Yet as Rambam himself does with respect to his definition of God, at times we need to identify what something isn’t, in order to gain a better understanding of what it is.

Admittedly, there are many more sources on the subject that could have been analysed – both including those such as Meshech Chochmah and Yeshayahu Leibowitz who take a narrower view of holiness, and Hassidic and Mystical Masters who identify sparks of holiness in people and nature. Still, I suspect that were he to have done so, the author would not have been able to maintain the level of philosophical clarity which clearly drove him in his intellectual enquiry and which is evident from his conclusions.

A Theology of Holiness is a thinking person’s book, but one that is accessible to all people of all backgrounds who are prepared to do some thinking, and it is an engaging read that I think will stimulate and resonate with many.