We’ve just started the hebrew month of Ellul, which means that we will be celebrating Rosh Hashanah, the Jewish new year, in just under a month.

One of the greatest lessons in Judaism is that we begin the year by planning for the future and by trying to identify how we can be our best selves in the coming year. However, as part of that process, we must also evaluate where we may have erred in the past. This self-evaluation, and this journey of reconnecting with our best selves, is called teshuvah.

To achieve all this, and to find our best selves, we need to be in touch with ourselves.

However, sadly, I think that too few of us are. To reconnect with our best selves we need to be spiritually aware. But for a variety of reasons, many of us become spiritually numb, and it takes a profound awakening to resensitise us to our souls.

So in this shiur I would like to explore the topic of spiritual numbness and discuss how we can ensure that we are able to maintain spiritual awareness, and to begin, I would like to talk about a song by the English rock band Pink Floyd.

“Comfortably Numb” is a song by Pink Floyd which first appeared on the 1979 double album The Wall. The song is one of Pink Floyd’s most famous, and is renowned especially for its guitar solos.

Like many other songs, fans were curious about the meaning behind the lyrics, and it was in a radio interview in 1980 when Roger Waters explained that he wrote the song based on what happened to him during his performance in Philadelphia in June 1977.

Just before the show Waters experienced terrible stomach cramps. What had actually happened was that he had contracted hepatitis, but he didn’t know it. Instead, a local doctor gave him a sedative to help the pain. During the show, his hands became numb. He was unable to focus. Yet, what really surprised him was the fact that the fans didn’t care because they were so busy screaming. This is what he meant by the term “Comfortably Numb” – meaning that he had no feeling, but it seemed to make no difference. This is why the song was included in The Wall, which explores the alienation between the audience and band.

In terms of the song itself, perhaps the most powerful line in “Comfortably Numb” is when Waters sings:

When I was a child

I caught a fleeting glimpse

Out of the corner of my eye.

I turned to look but it was gone

I cannot put my finger on it now

The child is grown,

The dream is gone.

I have become comfortably numb.

While these words were written in a time and context very different to mine, and why Roger Waters’ persistent criticism of Israel means that he is hardly someone that we would consider to be a thought leader especially as we approach these awesome days, I believe that these lyrics contain some level of eternal truth, and whenever Ellul, Rosh Hashanah and Yom Kippur come, I too ask myself: Have I become comfortably numb?

Of course, you may think that this idea of becoming comfortably numb is a modern phenomenon. However, since we are told to serve God with our hearts, it is perhaps unsurprising that our Rabbis regard all behaviour that does not reflect the will of God as reflecting a form of numbness of heart.

In fact, when discussing the laws of kosher foods (Vayikra 11:41-43), our Rabbis (Yoma 39a) tell us not to defile ourselves with them, because their consumption will lead to ‘Timtum Halev’- becoming spiritually numb. As they explained, ‘sin numbs the heart of mankind’, and therefore, each time we choose to follow a lifestyle that does not reflect the will of God, we become even more numb to experiencing God’s presence and splendour.

Moreover, when recounting the consequences of not following the ways of God, the Torah itself, tells us that we will be punished with a numbness of heart (Devarim 28:28), and among the list of sins that we repent for on Yom Kippur, we bang our hearts ‘for the sin that we have sinned before you, through numbness of heart’.

But aside from banging our hearts, is there any more effective way of increasing our spiritual awareness?

As Rav Dessler explains, ‘numbness of heart is not a physical reality… instead it is an attitude whereby a person dismisses any constructive criticism they have been given in the realm of spiritual guidance’ (Sefer Hazikaron L’Ba’al Michtav M’Eliyahu p. 42). For Rav Dessler, we become spiritually numb when we choose to ignore the calls for spiritual growth, but for this to occur, we need people to encourage us to spiritually grow.

I don’t know whether any of you have hired a personal trainer to help you get fit, but this is something I know I need to do. While I know I need to exercise and eat better, I know that I actually need someone other than myself to motivate me to do so.

What Rav Dessler is saying is that just as there is value for personal trainers to motivate us to stay in physical shape, everyone also needs spiritual motivators to help stay in spiritual shape.

So to maintain spiritual awareness and to continue to spiritually grow, we need others to encourage us to do so.

However, while hearing the message is important, following up with actions is even more. The anonymous Sefer HaChinuch (Mitzvah 16) writes repeatedly that ‘after one’s actions, the heart is drawn’, meaning that while listening and learning is an important element for us to find the right direction in life, the only real measure for success is through changing our actions, and to explain this idea further, I would like to relate a powerful story told by Rabbi Cardozo (Rabbi Dr Nathan Lopes Cardozo, “Halacha as Symphony” in Crisis, Covenant & Creativity pp. 24-25).

He explains that ‘Once on a visit to America, as I was sitting in my hotel lobby minding my own business, I was approached by two men who wanted to know if I was a rabbi. Then without asking for any further credentials, they proceeded to tell me my story. The two men were Vietnam War veterans and they had a question that they wanted to ask specifically to a rabbi, because so far no one else had been able to help them.

It seemed the two men had been raised in America with strong Christian values, particularly as regards the sanctity of human life. As they were growing up they had never thought to hurt a fellow human being. Certainly they never dreamed of ever killing anyone. So you can imagine their fright when upon being sent into war in Vietnam, they were given orders to kill the enemy. Nothing could have been so incongruous with their upbringing or so repulsive to their very nature.

At first they resisted their orders. But under the duress of their commanding officers they were eventually forced to comply. The first time it was torture for their souls. The cognitive dissonance rang in their ears as they saw their most precious values shattered before them. They felt they would never be able to live with themselves again. But after a short while the killing got easier. Too easy. Even enjoyable. Things deteriorated to the point that murder became a game to them. They would even have competitions to see who could kill the most. Such had become the depths of their depravity and degradation.

As they stood before him they admitted with heavy hearts that they had lost all feeling for the sanctity of human life. The sensitivity they had felt in their youth toward others had not been returned to them once they had re-entered civilization. They admitted to me that on a whim they could kill anybody on the street and not feel an ounce of regret. What they wanted me to tell them was how to get that feeling back, the feeling that life is holy and not to be violated. They felt they had lost something and did not know how to go about finding it. Their spiritual leaders and psychologists had not been able to help them – could I?

I did not give them Socrates’ advice. All the books on philosophy, psychology, and poetry would not help regain that feeling of compassion. Neither did I tell them that their mission was hopeless. I gave them rather the advice of the Torah. I told them to get involved with helping others, to do acts of loving kindness, what we call chessed. “Volunteer in a hospital or an old age home,” I advised. “Just start doing things for others and you will slowly begin to recognize life’s sanctity once more. The deeds will create a new mentality and bring out the thoughts and emotions that you did not even know were hiding there.”…Actions had desensitized them, and only by action could they regain what was lost.

7. HOW DO YOU KNOW WHEN YOU HAVE SUCCEEDED?

As both Rav Dessler (Strive For Truth Vol. 3 p. 134) and Rav Kook (Orot HaTeshuva Chapter 5:1) explain, teshuvah occurs when a person feels most connected to themselves and to God. It is a joyous feeling of spiritual awareness, and a relief of leaving behind the feeling of spiritual numbness.

However, as the new year begins, we must continue to avoid the risk of spiritual numbness, and here we return to Rav Dessler and Rav Cardozo. Surround yourselves with other growth oriented people and get involved in activities that stimulate the soul. These may differ from person to person, but as the Sefer HaChinuch explains ‘after one’s actions, the heart is drawn’, 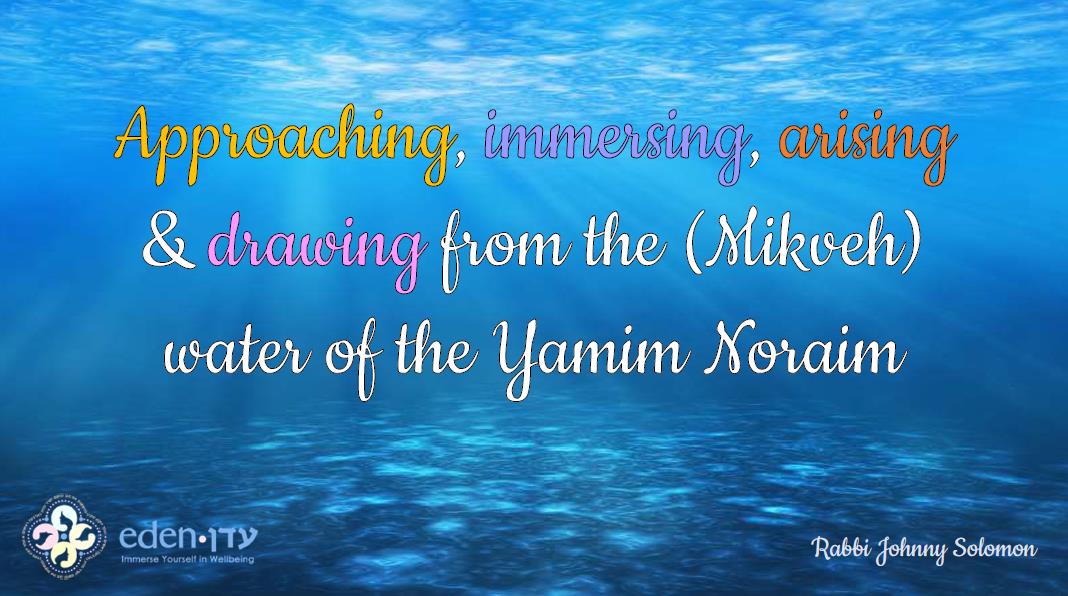