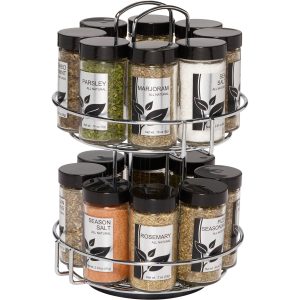 In seeking to explain the distinction drawn by Beit Hillel in the Mishna (Beitzah 1:7) in today’s daf (Beitzah 14a) who permits crushing spices with a stone pestle on Yom Tov, but who rules that salt may only be crushed on Yom Tov with a wooden pestle (or another tool other than a pestle), the Gemara notes that כל התבלין מפיגין טעמן – ‘all the spices [begin] losing their flavour [after being crushed]’ whereas מלח אינה מפיגה טעמה – ‘salt does not [begin] losing its flavour [after being crushed]’. What this means is that since salt wouldn’t have diminished in quality had it been crushed before Yom Tov, this should have been done before Yom Tov and consequently, a regular pestle cannot be used for salt on Yom Tov.
However, since other spices would have diminished in quality had they been crushed before Yom Tov, they may be crushed on Yom Tov in the usual manner.
However, in addition to the distinction drawn by the Gemara where salt has a longevity that some other spices do not, salt and spices differ in other ways. Specifically, salt is used as a preservative for food and it is used to draw out liquid and flavour from a food, while spices are used to add flavour to a food. What this means is that salt is all about celebrating the taste that is already present in a food, whereas spices are about adding complementary flavours to that food.
Significantly, many traditionalists believe that Torah needs nothing more than salt to help us preserve and celebrate its own natural flavours, and that were we to do just so, we would – to quote from Tehillim 34:9 – ‘taste and see that Hashem is good’. Moderns, however, often make the claim that Torah and Judaism needs ‘spicing up’, and that the needs of the hour require that we add new complementary flavours to enrich the dish of Torah. Though this may be true in part, the problem with this is that when tasting a dish to which spices have been added, it is often impossible to distinguish between the flavours of the food or the spice, and there are also some who, rather than using complementary spices, use those that diminish or undermine the original flavour of the food.
Beyond this, while salt has a longevity, many spices do not, which means that unless they are freshly prepared, those spices can inadvertently become the least fresh ingredient in a dish. Ironically, in an attempt to ‘spice up’ a dish, the dish actually becomes more shallow and stale.
Unfortunately, I believe we have seen this in recent decades, and too many contemporary Jewish leaders and communities use too little ‘salt’ to preserve and draw out the rich flavour of Torah, and too many ‘spices’ (and often not even the fresh variety!) which confuses and undermines the flavour of Torah.
Though I am someone who deeply appreciates deep flavours and spices (nb. my grandmother was Indian and used a vast range of exquisite spices in her curries which I adored), and though I am someone who believes that we need to harness modern tools to share and celebrate Torah teachings, I also believe – unapologetically – in preserving and drawing out the taste of Torah, rather than in adding many different spices and flavours to it.
Of course, different people have different palates, and there are occasions when both salt and spices are needed. But like the greatest of chefs, we should be sure that we show respect and do justice to our primary ingredient – Torah.
Go to Top