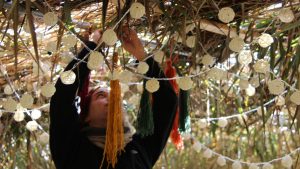 Early on in today’s daf (Beitzah 19a), we are introduced to a fascinating Talmudic principle of מחשבתו נכרת מתוך מעשיו – ‘a person’s intentions are evident from their actions’.
As is clear from the specific case being discussed in the Gemara, there are many occasions where it is impossible to know the intentions of a person in any given moment. Furthermore, the general attitude towards intent in halacha is that intent alone – uncoupled to action – is inconsequential (דברים שבלב אינן דברים). Nevertheless, when specific actions are performed as an expression of specific intentions, then we can – as best as is possible – deduce a person’s intentions from their actions.
Naturally this principle has a number of applications, one of which – as noted by Rabbi Tzvi Aryeh Twerski (HaTov V’HaTachlit, Ma’amar 5) – relates to the need for us to actually say our prayers by moving our lips. But, as he asks, why are intentions alone insufficient? Why can’t we merely think our prayers and intend our prayers? Why is it necessary to enunciate our prayers?
He answers by explaining that ‘since a person has both a soul and a body… were they to serve God only with their intentions, their [spiritual] intentions would not be evident from their [physical] actions… Therefore, it is necessary that the body also assists in the performance of a mitzvah so that the mitzvah is performed by both [the soul and body] at once.’
Over the past past 40 days – between Rosh Chodesh Ellul until Yom Kippur – we have immersed ourselves in reflection and prayer while communicating our positive intentions to God. And then, just days afterwards, Sukkot – a festival involving significant physical effort in its preparation (through building a sukkah, purchasing arba minim, and preparing the Yom Tov meals), and the moving of our physical bodies in its celebration (through dwelling in a sukkah, and the waving the Arba Minim) – comes along, as if to say: ‘since a person’s intentions are evident from their actions, let’s see how many of those intentions can be translated into actions.’
Thus, by investing time and effort to perform these actions, we express our desire to unify our soul’s intentions (as communicated between Ellul until Yom Kippur) and our bodily actions (as performed in the days prior to, as well as the days of, Sukkot), and achieve a sense of wholeness and inner peace – where both soul and body are at one with each other.
Go to Top