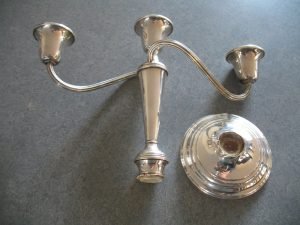 We were previously taught in the Mishna (Beitzah 2:6, 21b) that on three matters Rabban Gamliel ruled strictly in accordance with Beit Shammai – of which one was that אין זוקפין את המנורה ביום טוב – ‘we may not straighten a candlestick on Yom Tov’.

In today’s daf (Beitzah 22a) this ruling is further scrutinized, and it is here where we learn that what is being discussed is a candlestick made up of different parts, such that by straightening the candlestick, Beit Shammai considers it to be a form of בונה – building.

Interestingly, we are taught in the Tosefta (Beitzah 2:12) about a time when Rabban Gamliel and other elders were sitting together [in Rome] and the candlestick fell on Yom Tov. Rabbi Akiva, who was among those present, got up and straightened the candlestick.

Rabban Gamliel – seemingly frustrated by the fact that Rabbi Akiva took a stance on this controversy and, moreover, acted contrary to his view – retorted to Rabbi Akiva: ‘Akiva! Why are you putting your head between the argument [concerning whether such an action is permitted or not]?’ To this, Rabbi Akiva responded, ‘Have you not taught us that we follow the majority? Even though you forbid [such an action], they permit it, and the law is in accordance with the majority.’

From Rabban Gamliel’s response it seems that he felt that Rabbi Akiva was not qualified to take a stance on this debate. However, Rabbi Akiva responded by explaining that the debate was already decided based on the Torah’s ruling that we follow the majority – meaning that he was not deciding the halacha, but rather, acting in accordance with the halacha as decided by the rules of halacha.

What we see here is that while an individual posek has the right to rule according to their understanding of the halacha, this does not negate the legitimacy of halachic principles – such as ‘follow the majority’ (in those instances where such principles apply) – from being applied.