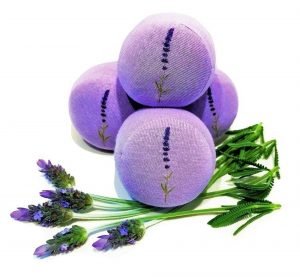 Early on in today’s daf (Beitzah 23a) we are taught that ‘inverting a fragrant cup on silk garments on Yom Tov is prohibited because it creates a [new] fragrance [in the garment]’. This is codified by the Rema in Orach Chaim 511:4, on which the Mishna Berura (note 26) adds that ‘[this applies] even with a garment which is already fragrant, one may not place [fragrances] on it in order for it to smell even more. Nevertheless, where an etrog was placed on the eve of a Festival on a garment and was subsequently removed from it, it is permissible to return it, because [an individual] does not [seek to generate] more of a scent by doing so’.

This question had a practical application in my home a few years ago when we bought one of my daughters a cloth lavender stress ball which emitted a lavender scent especially when compressed. The question on our mind was whether this was permitted to be used on Shabbat and Yom Tov – and on the basis of the above mentioned Gemara, it seemed that it was not permitted.

However, I then explored this topic further and noted that the Shemirat Shabbat Kehilchata (Ch. 15 note 337) cites Rav Shlomo Zalman Auerbach who suggests that the case mentioned by the Mishna Berura, itself based on Beitzah 33b, concerning adding fragrance to an already fragrant garment involves adding a different fragrance, but to add more of the same fragrance is permitted. Moreover, Rav Auerbach supports this reading from the ruling of the Shulchan Aruch HaRav (511:7) who states that ‘if a type of spice was placed on a garment to the point that the smell of the spice has entered the garment, it is permitted to place more of this spice on [the garment] in order to increase the scent of the spice in the garment. However, it is forbidden to place on [the garment] a different type of spice for this then generates a new scent on the garment on the festival’.

As Rav Neuwirth observes, ‘it would appear in my humble opinion that [this distinction by Rav Auerbach is evident from] the final comment.. of the Mishna Berura’. And it was on this basis that we determined that it would be permitted to use the lavender stress ball on Shabbat – since one may add fragrance to an already fragrant garment.