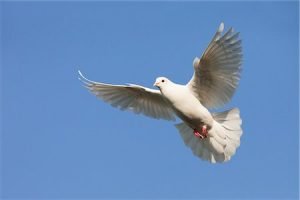 Much of today’s daf (Beitzah 24a) explores the prohibited melacha of ציד (trapping) on Shabbat and Yom Tov, during which reference is made to doves (who, as the Gemara implies, often appear as if they are free even when trapped) and the specific circumstances in which the catching of doves is considered as trapping.
Interestingly, Chazal compare ‘Knesset Yisrael’ (which we may define as the spiritual dimension of the Jewish people in the past, present and future) to a dove (see Brachot 53b and Shabbat 49a). According to the Maharsha, this is because doves only have one partner, just as Knesset Yisrael is a loyal wife to Hashem. Moreover, just as a dove protects itself with its wings, so too Knesset Yisrael is saved by its commandments which lifts itself to higher spiritual planes.
However, I would like to add a further layer of meaning to this metaphor and the idea that even when a dove is somewhat trapped it often acts as if it is free, and also by referring to a powerful moment in the movie ‘Shawshank Redemption’, and to a profound insight from one of contemporary Jewry’s great heroes.
In terms of Shawshank, having received a delivery of books and records for the prison library, Andy made the bold decision to play a recording of one of Mozart’s Opera’s over the PA system, thereby providing, ‘for the briefest of moments’, a feeling of freedom within the hearts of all the prisoners. This angered the prison warden who sent him for two weeks of solitary confinement. Yet as Andy was to later describe to his friends, even when confined to a prison they can still feel hope, and in doing so, maintain a sense of their freedom.
In a similar spirit – yet this time in real life – Natan Sharansky wrote in his autobiography ‘Fear No Evil’ about his 9 years of brutal imprisonment in Russia, including long stretches of solitary confinement, where even ‘in the punishment cell, I was inwardly a free man’.
The reason for me mentioning this is because, notwithstanding some challenges, I don’t take my life for granted, and having spent much of this week celebrating sukkot and dwelling in my sukkah in Israel, I am acutely aware that these very simple pleasures were a distant hope and dream for much of the Jewish people over the past 2000 years. During this period Knesset Yisrael were like a dove – trapped and often oppressed in exile. Yet like a dove which even when trapped feels a sense of freedom, or like Natan Sharansky who even when imprisoned felt ‘inwardly like a free man’, our ancestors were able to look beyond the walls which surrounded them and know that the Jewish people will, at some point, experience physical freedom to live as Jews and fulfil the mitzvot without fear.
At the same time, it should also be noted that freedom brings responsibilities. As Natan Sharansky adds: ‘In freedom, I am lost in a myriad of choices. When I walk on the street, dozens of cheeses, fruits, and juices stare at me from store windows. There are vegetables here I’d never seen or heard of, and an endless series of decisions that must be made: What to drink in the morning, coffee or tea? What newspaper to read? What to do in the evening? Where to go for the Sabbath? Which friends to visit? In the punishment cell, life was much simpler. Every day brought only once choice: good or evil, white or black, saying yes or no to the KGB. Moreover, I had all the time I needed to think about these choices, to concentrate on the most fundamental problems of existence, to test myself in fear, in hope, in belief, in love. And now, lost in thousands of mundane choices, I suddenly realize that there’s no time to reflect on the bigger questions. How to enjoy the vivid colors of freedom without losing the existential depth I felt in prison? How to absorb the many sounds of freedom without allowing them to jam the stirring call of the shofar that I heard so clearly in the punishment cell? And, most important, how, in all these thousands of meetings, handshakes, interviews, and speeches, to retain that unique feeling of the interconnection of human souls which I discovered in the Gulag? These are the questions I must answer in my new life.’
To my mind, this is why we learn Torah – to reflect on the bigger questions. Still, even these kinds of questions can get lost in our many diverse Torah learning pursuits. And this is why, on Shabbat Chol HaMoed Sukkot, it is customary to read Kohelet – a book all about ‘the most fundamental problems of existence’, which provides insights of ‘existential depth’. And by reflecting on the wise words of Kohelet, our soul helps connect back to the ‘stirring call of the shofar’ which we heard just a few weeks ago, it connects to themes relating to the preciousness and fragility of life, and also to ‘the unique feeling of the interconnection of human souls’ that is the blessing of life itself.
Go to Top