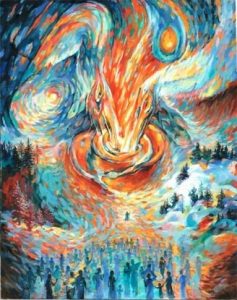 Having just read the Kriat HaTorah this morning of VeZot HaBracha, it was lovely to see one of the beautiful pesukim of the parsha quoted by a Beraita found in today’s daf yomi (Beitzah 25b).

In the final words of his life, Moshe Rabbeinu recounts how, ‘[The Lord came from Sinai. He shone upon them from Se’ir. He appeared over the crest of Paran and came among myriads of holy ones (i.e. angels)]; from His right hand was an אש דת for them.’ (Devarim 33:2).

Seemingly adopting the first approach of אש דת, the Beraita quoted in our daf states that we learn from these words of Moshe that it is as if, ‘the Holy One, Blessed be He, declared that “These people are worthy that they be given a fiery law (דת אש)”. But what does this mean?

Apparently inspired by the Chovot HaLevavot (Sha’ar Yichud HaMa’aseh Ch. 5), Rav Zalman Sorotzkin explains (in his Oznayim LaTorah commentary to Devarim 33:2) that, ‘fire illuminates the darkness, shows us the way, warms us when it is cold, and cooks us food. But at the same time, care must be taken not be burned by its flames or embers.’

Considering the fact that Moshe was speaking at the end of his life and the close of a 40-year journey through the wildernesses – during which Bnei Yisrael were guided, by day, by clouds of glory, and by night by a pillar of fire – it was clear by this point that Bnei Yisrael had proven their readiness to follow the fire of God and journey through the darkness of the unknown while being guided by the fire of God – and it was Moshe’s great hope that this is what the people would continue to do.

At the same time, there were moments in this 40-year journey when the people had sinned and ignored the word of God. They had worshipped the Egel, ignored the Torah, and brought ‘strange fires’ (אש זרה) to the altar. Clearly, Moshe’s great hope was that such actions would not be repeated once Bnei Yisrael entered the land of Israel.

So what is the meaning of the words of the Beraita that ‘these people are worthy that they be given a fiery law (דת אש)’? It means that while there were moments when Bnei Yisrael ignored or misrepresented the Torah, there were also plenty of moments when they followed the Torah and God’s pillar of fire – even when they were unsure of where that would take them. As such, God was prepared to take a chance with Bnei Yisrael. God believes in us, because we placed our faith in God.

Today there may not be a pillar of fire, and most of us are not physically wandering in a wilderness. Still, every Jew who makes the choice to follow the Torah – especially when they are unsure of where that may take them – affirms that decision of God. And by making the choice to follow the Torah which ‘illuminates the darkness [and] shows us the way’, we are blessed to be spiritually warmed when we are cold, and provided with a constant supply of hot spiritual nourishment – namely Torah itself.