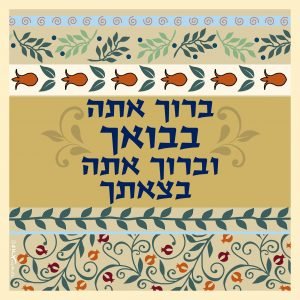 Today’s daf (Beitzah 26b) records a question posed by [the Amora] Hillel to Rava concerning יש מוקצה לחצי שבת – the mukzeh status of an item on Shabbat that was only unfit for part of Shabbat.
As the Gemara proceeds to explain, the case being described involves something (eg. figs that were drying outside) that was fit on the onset of Shabbat (which, it should be noted, is generally the window of time which determines whether an item is or is not mukzeh), which subsequently became unfit during Shabbat (eg. due to rain, the figs became inedible), and then became fit once again while it was still Shabbat (eg. as a result of the sun which dried the rain from the figs).
While a variety of suggestions are offered in the Gemara, it concludes (as confirmed in the Shulchan Aruch, Orach Chaim 310:3) that אין מוקצה לחצי שבת – meaning that notwithstanding the fact that the item was temporarily mukzeh over Shabbat, since it was not mukzeh on the onset of Shabbat, and since it returned to that status on Shabbat, then from then on it is not considered mukzeh (i.e. the temporary ‘dip’ in its halachic status does not frustrate its ability to revert to its prior halachic status).
Reflecting on this halacha concerning something that goes on a journey from non-mukzeh to mukzeh and back to non-mukzeh, I think of the journey of the soul, of how we declare each day א-להי נשמה שנתת לי טהרה היא – ‘My God, the soul You placed within me is pure’ (i.e. how it begins its journey טהרה), and of how Chazal (Bava Metzia 107a) interpreted Devarim 28:6, ברוך אתה בבואך וברוך אתה בצאתך – ‘Blessed be you on your entry, and Blessed be you on your exit’ – to mean ‘that your departure from the world will be like your arrival in the world; just as your arrival in the world was without sin, so too your departure from the world should be without sin’.
However, Chazal’s interpretation of the pasuk is strange, because surely, between birth and death a soul is likely to be tarnished by transgression? Yet, like the law that we learn in today’s daf that an item can revert to its prior non-mukzeh status, so too, a נשמה (soul) has the potential to revert to its prior טהרה (pure) status, thereby ensuring that its spiritual status on exit matches the spiritual status of its entry.
Personally, whenever I see a sign with these words of ברוך אתה בבואך וברוך אתה בצאתך – especially when they are hanging by the door of a sukkah which represents the fragility of life and the faith we should have in God as we journey through the precious gift that is our life – I am reminded of this interpretation. And when this occurs, I take a moment to consider how we should value every moment of life and do whatever we can to maintain our spiritual connection as we journey, each day, through life.
Go to Top