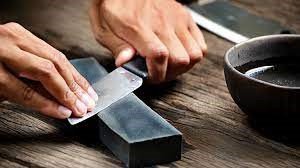 Having been taught in today’s daf (Beitzah 28a) that the only difference between the Shabbat and Yom Tov laws is אוכל נפש בלבד – matters relating to food, the question is raised in the Mishna (Beitzah 3:7) whether one may sharpen a knife on Yom Tov.
Significantly, the Mishna answers by ruling that one may not sharpen a knife in the usual manner (i.e. on a whetstone). However, it does state that it may be scraped on another knife or, as the Gemara then proceeds to explain, on a wooden sharpening board.
We are then taught in a Beraita that Rabbi Yehuda disagrees with the author of the Mishna and considers the permission of אוכל נפש to include acts associated with food such as sharpening knives. Still, as the Gemara then relates (see Beitzah 28b), while there were those who believed that the halacha followed Rav Yehuda, they did not rule this in public (הלכה ואין מורין כן).
Interestingly, this caveat features in how the Rambam presents the halacha (see Hilchot Yom Tov 4:9) who writes that ‘we may not sharpen a knife with a sharpener. One may, however, whet it on wood, on a shard, or on a stone. [However], this law should not be publicized (ואין מורין דבר זה לרבים), lest [the indiscriminate] come to sharpen it using a sharpener’, and this too is echoed in the halacha as found in the Shulchan Aruch (Orach Chaim 509:2). But what makes a halacha something that is not appropriate to be ruled in public? Surely if it is acceptable, it may be done by all?!
As I previously explained in my commentary to Eruvin 7a (see https://rabbijohnnysolomon.com/eruvin-7/), ‘this principle of הלכה ואין מורין כן (‘this is the law but we do not rule so in practice’), which is invoked in numerous places in the Gemara and on countless occasions in the responsa literature, is specifically concerned with the application of halacha in the public space, and it is predicated on the notion that while a particular position may be halachically valid and true (אמת), ruling as such would be halachically unwise and therefore incorrect (נכון) given the significant possibility that this or other halachot will be transgressed if this law would be widely promulgated, or given the possibility that Jewish practice and Jewish law would likely be misinterpreted and thereby brought into disrepute were it to be practiced. However, there are other occasions (such as our case) when one Sage takes this position of הלכה ואין מורין כן (‘this is the law but we do not rule so in practice’), while another views the situation differently and therefore rules that הלכה ומורין כן (this is the law and we should rule as such in practice). Given all this, the Vilna Gaon (see his ‘Aderet Eliyahu’ on Yeshayahu 1:17) teaches that ‘a responsible judge needs to have a double dose of wisdom. Firstly, they need to be fluent in the realm of the Torah and be able to deduce the law according to its true meaning. And secondly, they need to be fluent in reading human behaviour…[All] this is alluded to in the biblical phrase ‘וְהִנֵּה אֱמֶת נָכוֹן הַדָּבָר – and behold, the matter was true [and] correct’, meaning that [the judge must ensure that] their judgement is אמת (true) according to the law of the Torah, [and they must also ensure that it is] נכון (correct) based on their understanding of human behaviour.’
In our case, the desire to have a sharp knife to cut food on Yom Tov is strong, as is the desire to use the best utensil to sharpen one’s knife. However, since the temptation to do so is so strong, it was considered to be in the spirit of נכון not to publicise permission to do so – notwithstanding the fact that the אמת is that it is permitted to be done on certain materials.
Go to Top