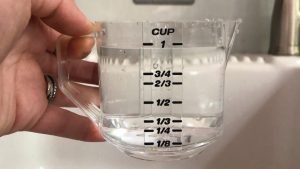 Today is Isru Chag (in Israel) which is when we reflect on the Yamim Tovim that we have experienced throughout Tishrei while also thinking about how we can channel the immense spiritual energy and inspiration that we have drawn within the past month into the coming year. And it is within this spirit that I read the Mishna (Beitzah 3:8) found in today’s daf (Beitzah 29a) which begins with the words אומר אדם לחבירו – ‘someone can say to their friend’, מלא לי כלי זה – ‘fill up this vessel for me’, אבל לא במדה – ‘but not with a measure’.
In terms of the Mishna itself, it refers to the prohibition of measuring quantities on Shabbat and Yom Tov, and describes a situation where someone gives a vessel which is used for measuring to another to fill it, but stipulates that they don’t pay attention to the measure when filling it up.
However, I would like to interpret these words in a different way, because during the past month of Tishrei we – as spiritual vessels – have been ‘filled up’ with tefillot, mitzvot and – at least in some places around the world – opportunities to connect with friends and family. And just like the Mishna describes unmeasured quantities, the impact of those tefillot and mitzvot and gatherings are genuinely immeasurable.
For some, it may be the words or tune of a tefillah that they have said or sung over the past month which may carry them during the coming year. For others, it will be the mitzvot that they performed which will serve as a merit for them. And for others, it will be the memories of good times of celebrating festivals with family or friends which they will think back to and will bring a smile to their face.
Either way, while the period of אחרי החגים often reminds us of all that needs to be done, the blessing of Tishrei is that we now approach all those things as filled vessels – feeling charged and ready to realise the aspirations we have fixed for ourselves for the coming year.