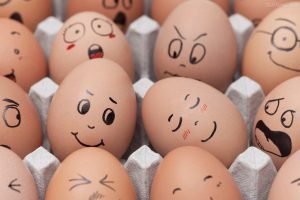 Having previously introduced the concept of נולד – whereby an item or substance that either evolved into existence on Shabbat or Yom Tov, or assumed a new form that it did not previously have, may not be used on Shabbat on Yom Tov (with the classic example being an egg laid on Shabbat or Yom Tov) – today’s daf (Beitzah 3b) discusses the reason for this law and a variety of ‘what if’s’, such as ‘what if a prohibited egg became mixed with (i.e. unidentifiable among) a thousand other eggs?’.

As you likely know, we have a variety of rules concerning תערובות (mixtures) where a prohibited item or substance becomes mixed with a permitted item or substance. But though we generally rule that where the majority of a תערובות is the permitted item, then the prohibited item is בטל (nullified) and the whole mixture is (at least biblically) permitted, there are some exceptions which are discussed in today’s daf.

One exception is what is known as דבר שיש לו מתירין – ‘something prohibited that will, in the future, become permitted’. What this means, as Rashi explains, is that since the egg will become permitted after Shabbat and Yom Tov, it is forbidden to rely on the process of ביטול (nullification). However, two further exceptions are what is known as דבר חשוב (an ‘important item’) and דבר שבמניין (an ‘item that is generally counted’) which – due to their individual importance or singularity, are not בטל (nullified) – meaning that even if you have a large mixture of something permitted, and a prohibited דבר חשוב or a דבר שבמניין falls into it, then that prohibited item is not בטל and remains prohibited.

Clearly, these are halachic principles with very practical halachic applications. But as I have previously explained, I – along with others – am of the belief that there are at least some practical halachic principles which contain or express deeper philosophical or theological ideas, and in terms of דבר חשוב or דבר שבמניין, these have previously been invoked by a variety of great Torah teachers to demonstrate how Avraham Avinu, who lived in a region where those around him served idols, did not nullify his principles or assimilate and adopt their ideas, but instead, maintained his ideological singularity. Similarly, notwithstanding the small size of the Jewish people and our great suffering and exiles throughout our history, we have – at least to some measure – maintained ourselves as a nation due to the important spiritual, intellectual and moral contribution we have made to the world, and due to our ideological singularity. Simply put, even when immersed in a social, cultural or religious mixture different to oneself, if you view yourself as being ‘important’, ‘unique’ and ‘someone who matters’, then you will be able to maintain your whole self.

Of course, this is a powerful and relevant to each one of us wherever we find ourselves. However, it is a particularly relevant message as we approach Rosh Hashanah, the anniversary of the creation of humanity, from which we learn that just as the first being – Adam – was created unique, so too, each of us are created unique (see Mishna Sanhedrin 4:5). As such, a core message of Rosh Hashanah is to reflect on our uniqueness and on how each of us are ‘important’, ‘unique’ and ‘someone who matters’. And this is why we are told that it is on Rosh Hashanah that we pass before God one by one (see Rosh Hashanah 18a), because by doing so, this affirms the uniqueness of each one of us.