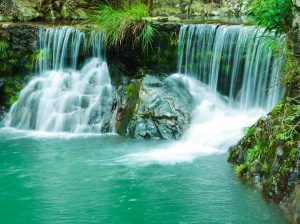 In today/tomorrow’s daf (Brachot 15b-16a) we read a beautiful drasha presented by Rav Chama B’Rabbi Chanina based on the words of Bilam.

Having proclaimed ‘How good are your tents (אהליך), Jacob, and your tabernacles, Israel’ (Bemidbar 24:5), Bilam continues by describing how: ‘They stretch out like brooks (נחלים), like gardens beside a river, like aloes (אהלים) planted by the Lord, like cedars beside the water’ (ibid. 24:6).

Reflecting on these verses Rav Chama wished to explore the association between אהלים – tents (either as explicit in v. 5 – Tosfot, or as hinted to in v. 6 – Rashi) and נחלים – brooks, and this led him to teach that ‘just as brooks (נחלים) can elevate a person from a state of impurity to purity, so too, tents (אהלים) can elevate a person from a bad judgement to a good judgement’

Clearly, when Rav Chama refers to a brook he is referring to a natural mikve which spiritual tranforms. But what kind of אהל is he referring to?