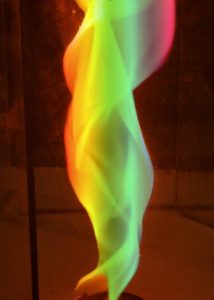 Chapter 8 of Mishna Brachot (Brachot 51b) lists a series of disputes between Beit Hillel and Beit Shammai concerning the laws of Kiddush, Birkat HaMazon and Havdalah, and like each of the 316 occasions throughout the Gemara where Beit Hillel and Beit Shammai disagree, each micro dispute listed in this Mishna apparently expresses their particular disagreements on particular topics.

However, numerous scholars have claimed that running beneath each micro dispute between Beit Hillel and Beit Shammai is, in fact, a macro debate between these two great schools of scholarship concerning how they see the world, and though there are many different theories on this topic, here is just one approach – offered by Rav Zevin (LeOr Hahalacha pp. 175-176) – relating to just one of the disputes found in our Mishna.

According to the Gemara (Brachot 52b), the micro point of disagreement concerns the nature of the flame that emerges from a candle. For Beit Shammai, the flame is a single entity that was previously created by God and we therefore thank God for having previously created the single unit that is a flame. Constrasting this view is that of Beit Hillel who claim that each flame is made up of different colours that are constantly being created, and we therefore thank God for constantly creating the many colours of the flame.

Nevertheless, as Rav Zevin suggests, this debate – like so many others between Beit Hillel and Beit Shammai – reveals a macro debate about how we should look at the world – either in terms of its potential (כח) or its actual outcome (פועל). For Beit Shammai, the essence of our celebration of the flame is rooted in its historic creation and the potential that it has always carried to bring to the world. But according to Beit Hillel, the essence of our celebration of the flame is not rooted in its potential, but rather in what it actually brings to the world – namely its flame of many colours, and it is therefore this multi-coloured element that requires acknowledgement and blessing.

As mentioned, there are many other ways to frame these debates. Still, in a simplified version it may be claimed that what we learn from the above, and the fact that we rule here like Beit Hillel, is that life is not just about what may come of things, but instead, what we bring out of them.