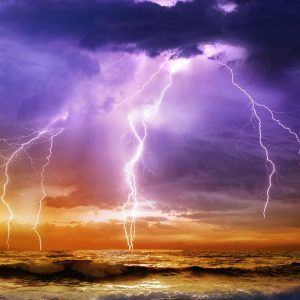 We were taught in Chapter 9 of Mishna Brachot (see Brachot 54a) that if someone sees a comet in the sky, experiences an earthquake, hears thunder, encounters significant winds or sees lightning (ברקים) then they recite the bracha ending with the words שכוחו וגבורתו מלא עולם – ‘whose strength and might fill the world’.

In today’s daf (Brachot 59a), further details are provided about many of these cases surrounding the שכוחו וגבורתו bracha including a discussion of Rava’s ruling that the blessing on lightning may be recited even if just a single bolt of lightning (ברקא) is seen.

Significantly, an extension of this ruling is discussed by Rav Shlomo Zalman Auerbach (Halichot Shlomo: Brachot p. 287 note 39) who raises the question whether someone reciting the bracha need actually see the lightning bolt, or whether the bracha may be recited merely on seeing a flash of lightning. He answers that we may recite the bracha in either case, and this is because even just the flash of lightning has the ability to stir emotion in our hearts while also reminding us of God’s power as the Creator of the world.

Yet I think that embedded in this debate is something far deeper than merely the technical question of when to recite this bracha. In fact, I think this debate gets to the roots of what we look for as proof of a divine revelation.

In the time of the Gemara there were those who set the bar exceedingly high in acknowledging God’s power, glory and intervention. For them, they needed to see ברקים i.e. grand & manifold ‘lightbolt’ moments, and only when beholding their sight were they prepared to acknowledge that they had experienced ‘the strength and might of God’. To such people Rava responded by saying that even when they see a ברקא – a single lightning bolt – they should be marvelled by God’s greatness and reciting the bracha.

In our generation there are those who still set a high bar and they say that only when they experience a ברקא i.e. a ‘lightbolt’ moment, will they acknowledge God’s power, glory and intervention. To such people that Rav Shlomo Zalman responded that even when they see the אור הברק – the lightning flash – this can, and should, be a powerful reminder of God as Creator.

In his introduction to the Moreh Nevuchim, Rambam describes prophecy as a flash of lightning providing us with momentary illumination of our purpose and mission in life. Yet all too often, even when we experience a flash of lightning we are unconvinced by what we see because there was no ברקא – a ‘lightbolt’ moment, and even when seeing a ברקא, many of us are unconvinced and claim that we will only accept God’s message if we encounter ברקים – grand & manifold ‘lightbolt’ moments.

The simple lesson of this bracha is that God’s כוחו וגבורתו מלא עולם – ‘strength and might fill the world’, but it is up to us to see it.