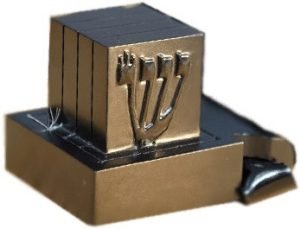 While I endeavour to learn, understand and appreciate the significance and symbolism of the mitzvot that I perform, there are times when I encounter a text which takes my understanding and appreciation to a new level.

A case in point is today’s daf (Shabbat 62a) where we are taught about the impropriety of going to the toilet while wearing tefillin because, as already noted earlier in Shabbat 28b, on the tefillin is a ‘shin’ that protrudes from the leather box of the ‘tefillin shel rosh’.

On first glance this rule seems strange as it implies that a singular hebrew letter, in this case a ‘shin’, is a holy object. Yet while there are those authorities who are insistent that ‘ktav ashuri’ has inherent holiness (see Asseh Lecha Rav 5:26-27), others do not take such an insistent position.

Significantly, the Gemara informs us why this is so is because the ‘shin’ on the tefillin is a ‘Halacha L’Moshe MiSinai’ – which is generally understood to mean that the law of placing a ‘shin’ on the sides of tefillin is a rule that, though not derived from or implied by the words of the torah, is still a law that was given by God to Moshe at Sinai. Thus the letter is more than a letter; it is an expression of a sacred law.

Yet here too this seems strange. Why should the fact that the rule of the protruded ‘shin’ has Sinaitic origins but has no scriptural basis be the reason for it having uniquely inherent holiness? Let us not forget that the tefillin themselves are also of Sinaitic origin, yet it seems from the Gemara that were there not to be a protruding ‘shin’, tefillin could be taken into a toilet since the actual scrolls containing the names of God are covered by the tefillin boxes.

Before proceeding it should be noted that while the Gemara refers to the ‘Shin’ on the tefillin shel rosh, there are, in fact, two ‘shin’s’ – one is ‘three pronged’, and another is ‘four pronged’, and though we are all familiar with the three-pronged ‘shin’, the four-pronged is unusual and does not feature in our sifrei torah. The question is – which ‘Shin’ is being referred to in our Gemara, and why does one of them have four prongs?

According to tradition (see Tosfot Menachot 35a, Levush OC 32:43), when God gave Moshe the first set of luchot, the ‘shin’ that appeared there had four-prongs. However, when Moshe broke the luchot, this letter disappeared from our script, and when Moshe then wrote the second luchot, he did so using a three-pronged shin.

Based on this, the four-pronged shin is uniquely sinaitic because, since Matan Torah, it has not been used other than on the tefillin shel-rosh. In fact, we could claim that this ‘shin’ is not just a ‘Halacha L’Moshe MiSinai’, but was the singular letter that ‘Halcha MiMoshe B’Sinai’ – left Moshe at Sinai.

Understood this way, this ‘shin’ does have uniquely inherent holiness, and perhaps this is why the mystics (see Zohar Ekev 274a, Piskei Teshuvot on OC 25:11) suggest that someone who puts on tefillin should reflect and gaze upon the ‘shins’ of the tefillin shel rosh which they claim represent the entirety Torah – because by remembering the story of the lost shin, we recall the preciousness of our entire Torah as well.