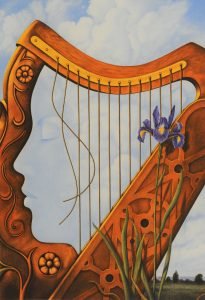 The Mishna at the end of today’s daf (Eruvin 10:13, 102b) informs us that ‘one may tie up a string [that came loose from a harp which is being used to play the songs accompanying the sacrifices] in the Temple, but not in the rest of the country (i.e. it is forbidden to repair musical instruments other than those being used in the Temple)’.
On first glance, it may seem strange why such an action is permitted simply so that music could be played while the sacrifices were offered. However, at least as Rabbi Meir explains (see Arachin 11a), song was so essential to the sacrificial worship that its absence invalidated the sacrifices because service must involve ‘joyfulness and gladness of heart’ (see Devarim 28:47). It is with this in mind that our Mishna grants permission to repair a harp on Shabbat so that the music played in the Temple be both joyous and uplifting.
Some years ago I delivered a shiur which explored the role of music in divine worship, and based on various Rabbinic sources (e.g. Mishna Sotah 9:11, Gittin 7a) I explained that the day the Temple was destroyed was, to borrow the title from Don McLean’s famous song, ‘the day the music died’, and though this wasn’t sustainable for the whole year round, this is why one of the customs that we adopt to mourn the destruction of both Temples in the weeks prior to Tisha B’Av is that we avoid listening to instrumental music. Still, while the physical song in the physical Temple is no longer, the possibility of living our life as a song is very much possible.
The Chafetz Chaim (in his ‘Ahavat Chessed’ Ch. 12) cites the Mishna (Avot 1:2) which states how the world is sustained on three things: Torah (Torah study), Avodah (Temple Worship, which has – in part – been replaced by daily prayer), and Gemilut Chasadim (Acts of Kindness). However, he then adds, ‘for our many sins, now that we are missing the (full expression of the) third pillar of Avodah since the time of the churban (destruction), we only have the remaining two (solid) pillars which we must strengthen so they can carry us – namely Torah and Gemilut Chasadim’.
In terms of Torah study, this itself is referred to as a song (see Devarim 31:19). ‘And why call the Torah a song?’, asks Rabbi Sacks zt’l, ‘because if we are to hand on our faith and way of life to the next generation, it must sing. Torah must be affective, not just cognitive. It must speak to our emotions.’
Yet just as a musical instrument can occasionally need attention and repairs, so too can our learning, and just as the music played in the Temple needed to be with ‘joyfulness and gladness of heart’, so too should our learning. Along these lines, just yesterday I received a call from a parent who explained that their child is currently not feeling joy and gladness in their Torah learning and who said that the Yeshiva that his son is currently attending isn’t working out well for him. Both the son and the father love Torah but, for whatever reason, a string in the son’s Torah study has come loose. In the coming days I’m planning to meet with the son and talk with him, and this reminds me that just as an instrument can become out of tune or need a repair, so too, the instruments that we use to sing our divine song can require the same.
And what of Chessed which Rabbi Sacks so movingly describes as ‘love expressed as deed’ and ‘the physical deed in which soul touches soul’? I believe that, here too, there can be times when the Chessed that we think we are doing well requires recalibration and even repairing, and there can be moments when we think we are helping a child, a family member, or a friend, but our assistance is somewhat out of tune with their needs.
True, we may no longer have a temple, yet it is equally true that there is still so much we can do to bring goodness, wisdom, joyfulness, gladness, kindness, morality and love to the world. Ultimately, each action we perform is a song, and each day we live is a symphony. But once in a while we should take a moment to listen to ourselves and to others to ensure that our strings and our notes are in tune, and where we find that a string is broken or a note is out of tune, we should take the time to do what we can to fix it.
×
×