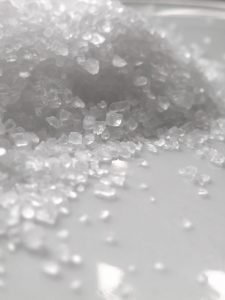 Having reached the penultimate daf of Massechet Eruvin (nb. I hope to share something special tomorrow to celebrate our completion), I am drawn to the Mishna in today’s daf (Eruvin 10:14, 104a) which states that ‘one may break up salt [and scatter it] on the ramp [of the Altar in the Temple], so that [the Kohanim] do not slip [on the Altar after it has become wet from rain]’.

As we know, by breaking up salt into small particles and placing it on a wet surface, the salt both absorbs the moisture and also provides friction to avoid slippage on the wet surface.

Yet beyond its physical qualities, salt is often used by our Sages as a symbol of wisdom that is used to draw understanding from particular moments or texts. For example, as the Pardes Yosef (Vayikra 2:13) points out how the Gemara (Kiddushin 29b) refers to a gifted child with the ability to grasp and draw meaning from texts as a ממולח (literally, ‘one that has salt’), and in a similar spirit, earlier in Massechet Eruvin (36a) we read that Rav Nachman remarked ‘when you measure out a kur of salt [I’ll answer your question]’, meaning that he wanted the questioner to provide him with some words of wisdom before answering their question.

I mention all this because just like it took salt particles to help the Kohanim ascend the wet ramp of the Altar, so too, I couldn’t have reached the penultimate page of Massechet Eruvin, especially during the past few challenging months, without the many grains of salt that I have placed ahead of me to enable me in this steep ascent. Specifically, these include the Artscroll Gemara and its rich commentaries, the Steinsaltz Talmud and its nuanced insights, and the many other classic and modern commentaries that I have accessed either in book form or from online databases (eg. Hebrewbooks, Otzar HaChochmah) – all of which have been invaluable in helping me understand at least one line per daf.

Finally, I am indebted to all of you who have shared your insights with me, and thereby provided me with further salt to add to the rich flavour of my Daf Yomi study.