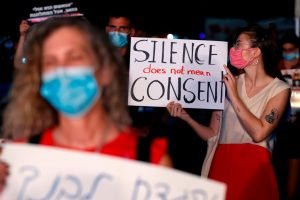 Like most people, one of my greatest fears is being alone and in need of assistance – yet when I call out to others to come and help me, they do not hear me and they do not come.
I mention this in connection to today’s daf (Eruvin 17a) where we are taught in a Beraita that wherever a soldier is killed is where they should be buried. Yet as the Gemara then points out, surely this rule is obvious since such a soldier is a מת מצוה – someone whose body is found unattended – who should be buried by anyone who finds them in the location where they find them, and who ‘[legally] acquires the site where they have been found [which justifies them being buried there]’.
The Gemara answers this question by explaining that a classic מת מצוה is someone who has no-one to attend to their burial needs such that ‘if they (i.e. the dead body) were to call out’, they would have no-one (i.e. no relatives or friends) nearby with an absolute duty of care towards them to bury them; while the Beraita comes to teach us that even when a soldier does have relatives nearby, the soldier is still regarded as a מת מצוה.
While the general sentiments of this law – which relate to human dignity – speak deeply to me, I was particularly moved by the definition of a מת מצוה that ‘if they were to call out to others’, they would have no-one (i.e. no relatives or friends) nearby to respond to their call. In fact, upon thinking about this further I realised that while the Gemara is speaking about a case of someone who has died, it also describes many other situations of people who are alive who have been in horrific situations when they were alone and in need of assistance, yet when they needed others to come and help them, their needs were not heard and others did not come.
Sadly, I can think of many situations that fit this description. But it is noteworthy that the Torah powerfully actually presents an example of such a situation where a woman is raped and where ‘the woman cried out, but no one came to her aid’ (Devarim 22:27) – and I believe that we would do well as a society to consider how we approach the concept of a מת מצוה, with that of a rape victim.
Just as the Torah speaks of the absolute duty of anyone and everyone to hear the silent call of a מת מצוה and not to walk on by but, instead, to help them in any and every way possible, the Torah also speaks of the absolute duty of anyone and everyone to hear the cry (which is occasionally is a cry that can be heard, but which is often – like the מת מצוה – a silent cry) of a rape victim, and if they suspect that a rape may be taking place, not to walk on by but, instead, to help in any and every way possible.
Yet there is something deeply unsettling in our societal priorities. While we are taught to hear the silent call of the מת מצוה, and while attending to the needs of the dead is something that we respect and we revere, attending to the needs of the living who have undergone a horrific trauma such as rape is not given anything close to the same level of priority.
Beyond this, while it is absurd to blame a מת מצוה for dying in a place in a location where they have no relatives or friends nearby, still, even today, there are those who somehow think it justified to direct so form of blame towards a victim of rape – rather than directly all blame towards the rapists who did such horrific things to her.
Ultimately, while today’s daf teaches us that we should hear the silent call of a מת מצוה and that a מת מצוה has rights and needs to be assisted immediately and with dignity, sadly there is still much to be done so for our society to be attuned to hear the silent cry of a victim of rape and to give such victims the rights, the assistance, and the dignity that they deserve.
×
×