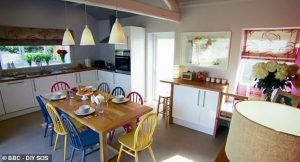 I have an admission to make which is that I love watching TV shows – like the British DIY SOS – where a house in need of significant improvements and which is not meeting the physical needs of its inhabitants is overhauled by a team of professionals over a short period of time.
It is hard to know why I love these kinds of shows – especially as I am not particularly skilled in DIY – but I suspect it is because there is something truly magical about seeing how something imperfect can be transformed into something seemingly perfect to a level and in a timeframe that the owner of the house could have only dreamt of.
However, perhaps a further reason why I enjoy watching these shows is that – though these transformations are real – they achieve outcomes which are, for most of us, unrealistic. Simply put, most of us cannot afford to have a huge team of professionals overhaul our homes or to work together at such speed. Instead, I – like most other people – have a long list of various home repairs and improvements which I am constantly working on or getting professionals to fix, and while I’ve had a chance to attend to some of these over the past few months, I suspect that I’ll always have such a list.
I mention all this in relation to today’s daf (Eruvin 24a) which discusses how to halachically transform a קרפף – an enclosed non-residential space – wherein carrying on Shabbat is rabbinically forbidden, to a space where carrying is permitted having now become attached to a residential neighbourhood.
According to Rav Nachman in the name of Shmuel, this can be achieved by making a breach in the קרפף enclosure more than 10 amot (approx. 5 metres) wide – thereby invalidating the prior halachic status of the קרפף – and then fixing the enclosure so that the breach is no wider than 10 amot.
However, creating a breach more than 10 amot wide is clearly a significant labour, and given this the Gemara then asks whether this huge breach and repair must be done at once, or whether this transformation can be achieved over a period of time such that if someone ‘breached an amah (approx. 50cm) and then fixed that breach etc. ‘until this has been done for a width larger than 10 [amot]’ this would achieve the same goal?
As the Gemara subsequently proves, this too is a valid method, and therefore while the halachic status of a קרפף can be transformed through one intense period of deconstruction and reconstruction, it can also be transformed through a series of smaller breaches and repairs as well. But this lesson goes beyond the laws of a קרפף and it can also be applied to how we approach self-improvement.
Unfortunately, far too many of us think of self-improvement only in terms of the kinds of the transformations seen on TV shows that turn imperfect homes into something seemingly perfect homes through an intense period of deconstruction and reconstruction. In fact, over the years I have met many people who have wished to adopt this same process to their lives especially in their journey from living a secular life to living a religious life.
But what we often forget is that this is not how most repairs or transformations occur. In fact, quite often the pressure to meet a particular deadline on the TV show can actually mean that significant compromises have been made in the quality of work that is performed – so that though the home may look perfect to the TV camera but has only received a temporary makeover. In the same spirit, sometimes a person can rush to change their exterior so that they appear religious, but they may have failed to make some fundamental changes in the inner workings of their heart and mind.
Ultimately, what we learn from our daf is that while change and transformation in all its forms can be achieved through one dramatic and labour-intensive change given the right expertise and resources, it can also occur through a series of smaller changes. And while – if we have the resources – the former is a choice for us to take (presuming it can be done right), we should not forget that latter is something that we can – and we should – always be doing.
×
×