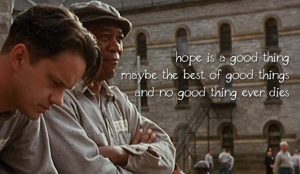 One of my all-time favourite movies is ‘The Shawshank Redemption’. However, what many people don’t realise is that while ‘Shawshank’ tells a series of powerful stories about prisoners, Shawshank is a profound philosophical debate about the concept of ‘Hope’.

While ‘Red’ – having been in prison for many years – had come to believe that ‘hope is a dangerous thing [that] can drive a man insane’, his friend Andy was driven by the power of hope and by the idea that, ‘hope is a good thing, maybe the best of things, and no good thing ever dies’. Though the movie certainly acknowledges the many challenges of imprisonment in all its forms, it ends with Red saying the words, ‘I hope to see my friend and shake his hand. I hope the Pacific is as blue as it has been in my dreams. I hope…’, and thereby acknowledging that Andy was right. Ultimately, Shawshank teaches us about the power of hope, and that we have the power to give hope to the hopeless and to help others see beyond the walls and limitations that seemingly surround their lives.

I mention this with respect to today’s daf (Eruvin 26a) which tells us that when King Chizkiyahu became ill and was near death, the prophet Yeshayahu ‘went and established a yeshiva near his door’ so that, as Rashi explains, the angel of death could not enter to take Chizkiyahu’s life.

However, as Rav Yosef Chaim points out in his ‘Ben Yehoyada’ commentary, these efforts of Yeshayahu seem to conflict with what we are taught elsewhere in the Gemara (Brachot 10a) where we read how Chizkiyahu suggested to Yeshayahu a way to save his life, to which Yeshayahu told him that, ‘a decree [of death] has already been decided for you [and there is nothing you can do to change this]’. But if Yeshayahu genuinely believed that there was nothing that could be done to save Chizkiyahu’s life, then why – as we are told in today’s daf – did he establish a yeshiva near Chizkiyahu’s door to protect him from the angel of death?

As Rav Yosef Chaim explains, the answer is found in Brachot 10a in Chizkiyahu’s response to Yeshayahu who – having been told that his situation was hopeless – then told Yeshayahu that, ‘I have been taught from the house of my father’s father than even if a sharp sword rests upon a person’s neck, they should not hold themselves back from [performing actions which may bring them] mercy’. Simply put, while Yeshayahu had told Chizkiyahu that his situation was hopeless, Chizkayahu responded by explaining the idea that, ‘hope is a good thing, maybe the best of things, and no good thing ever dies’. As a result of this, as Rav Yosef Chaim writes, ‘Yeshayahu changed his mind and subsequently invested efforts to assist him (i.e. Chizkiyahu) by establishing a yeshiva and by praying’.

We often encounter people who lack hope in their lives, or who have little hope for the lives of others. Yet the message that we learn from today’s daf – one that applies both to our physical lives and especially to our spiritual lives – is that hope is a good thing, and that just because our current situation may currently look bleak, does not mean that this is what our future will be. In fact, even if a sharp sword rests upon our neck, we learn that we shouldn’t hold ourselves back from performing acts that bring hope to us or others, because through doing so, these may also bring us or others greater mercy, merit, and – ultimately – life.