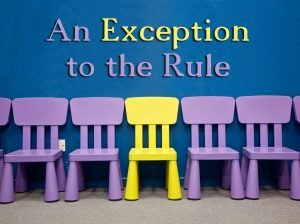 Much of today’s daf (Eruvin 27a) is focused on exploring Rabbi Yochanan’s principle of אין למדים מן הכללות ואפילו במקום שנאמר בו ”חוץ”, which means that ‘we cannot deduce laws from general rules [stated in the Mishna], even when those general rules seem to be very specific by stating specific exceptions to those rules’.

Significantly, Rabbi Yochanan’s principle is cited here because the previous Mishna (Eruvin 3:1, 26b-27a) taught a general rule that ‘all foods’ can be used to establish ערובי תחומין (whose presence allows people to walk further than the 2,000 amot limit on Shabbat) andשיתופי מבויות  (whose existence allows people to carry in a מבוי), while it then stated that water and salt are exceptions to this rule.

As the Gemara explains, Rabbi Yochanan’s principle had originally been stated with respect to a different Mishna (Kiddushin 1:7, 29a), but it then confirms that it applies to other Mishnayot (Zavin 5:2) as well as to our Mishna (Eruvin 3:1), and it concludes that this principle applies wherever general rules are stated and are followed by a list of exceptions. What we learn from here is that while the Mishna – in its endeavour to present halacha with both clarity and brevity – often states general rules and lists specific exceptions, we should never simply rely on those general rules or on those specific exceptions to determine the halacha, because clarity and brevity can at times come at the cost of comprehensiveness. Based on this, it would seem that a halachic decisor cannot merely rely on general rules that are found in the Mishna for the sake of determining the law. Instead, they must scour the entire rabbinic corpus in order to verify whether further exceptions exist before applying this general rule.

However, as Rabbeinu Asher Ben Yechiel states (Rosh, Shevuot 6:5), along with the Ramban (novelae to Shevuot 40a) and the Ran (ibid.), if Rabbi Yochanan’s principle were to be taken to the nth degree, no halachic decision could ever be reached given the possibility that a further exception to any given rule may exist somewhere in the expanse of the rabbinic corpus. Consequently, these commentaries narrowed the possible application of Rabbi Yochanan’s principle to mean that ‘we cannot deduce laws from general rules [stated in the Mishna], even when those general rules seem to be very specific by noting specific exceptions to those rules’ until we check whether any further exceptions have been listed in the Mishna or Beraita. Thus, for a halachic decisor to rely on general rules that are found in the Mishna, all they need to do is verify whether further exceptions have been stated within Mishnaic literature before then applying this general rule.

Like the Mishna, many of us often make generalisations about ourselves and about others, and like the Mishna itself, this is often done for the benefit of providing an easy-to-remember snapshot of ourselves or others. Yet while generalising is a common practice, we should do well to remember Rabbi Yochanan’s principle that just because we have a seemingly absolute snapshot of someone or something, this does not necessarily mean that this generalisation applies absolutely. At the same time, the point made by the Rosh and others is also fair, because without generalisations, we could predict nothing in life and no decision could ever be made.

Overall, we must balance our desire for clarity and certainty with the recognition that few things that are able to be distilled to clear and certain statements are absolute, and though life involves the art of generalisation, there are almost always exceptions to any rule.