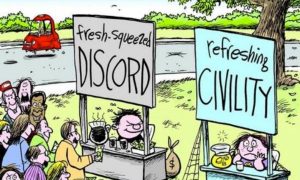 In attempting to make sense of the Mishna in today’s daf (Eruvin 3:4, 35a), we are informed that Rabbi Meir concurs with the opinion of his teacher Rabbi Akiva that the laws of techumin (forbidding someone from walking more than 2,000 amot on Shabbat) are a DeOraita (i.e. they are directly derived from the Torah text) law – which means that he treat the laws of techumin strictly even in a case of doubt.
However, the Gemara then asks whether this is so since we read in a later Mishna (Eruvin 5:4, 57b-58a) that Rabbi Meir is quoted as saying that ‘we pierce mountains’ – meaning that when techumin are calculated in a mountainous region, rather than measuring according to the path that someone would take by foot over the mountain, the techum is measured as if the mountain had a tunnel running through it. Clearly, adopting this measuring method is a significant leniency as it would enable someone to travel farther from any given point on Shabbat. Given this, the Gemara sought to know how Rabbi Meir – who adopts a strict position about techumin – would also promote this lenient method in measuring techumin?
The Gemara answers that while Rabbi Meir follows the approach of his teacher Rabbi Akiva that techumin are DeOraita and that we should therefore be strict in the laws of Techumin, some of Rabbi Meir’s other teachers did not share this view and, instead, were of the opinion that techumin are MideRabbanan (i.e. they are forbidden by dint of rabbinic and not biblical law) and that leniencies may therefore be applied to the laws of techumin. And in terms of Mishna Eruvin 5:4 where the discussion about ‘piercing mountains’ occurs, Rabbi Meir was merely being referenced as someone who had mentioned the more lenient method of ‘piercing mountains’ that he had heard from his other teachers but was not specifically expressing this as his own view.
In my opinion there is a very simple and very timely lesson that we can learn from Rabbi Meir who was not only prepared to share the opinion of the teacher with whom he agreed, but also the opinions of those teachers with whom he disagreed. It is a lesson that pondering and sharing the positions of those with whom you don’t agree isn’t a sign of weakness or confusion but is, instead, a sign of intelligence which demonstrates that you are aware of, and have considered, many different perspectives before reaching a particular conclusion.
In terms of Jewish law, a halachic decisor who merely rules in accordance with the opinion that is most to their liking and who does not grapple in their analysis with the arguments put forth by those who adopt a different view is not an authentic decisor. And in the same spirit, those who adopt a particular view towards education, religious practice, healthcare choices and political preferences merely because they have been taught a singular view and who – over time – have come to automatically dismiss all other views, are ultimately not really making a choice at all.
Sadly, too many of us think that in order to improve our civil discourse we simply need to consider how to make a better argument for the position with which we agree. But like many others, I think that in order to improve our civil discourse, we need to grow to be comfortable publicly discussing – without prejudice – those positions on which we disagree.
Of course, the primary reason why most of us don’t do so is because we are worried that people think that we ‘actually’ agree with those positions. But how nice would it be if we underwent a paradigm shift whereby rather than presuming that people will think that we are inconsistent, we instead presume that people will think that we are intelligent?
With this in mind, when you next read a newspaper article or hear a perspective expressing a view that you disagree with, please pause and consider the merits of that other perspective. Moreover, and where possible, the next time you discuss a topic such as this, try and present more than just your point of view.
And why should you do this?
Because the mere investment of time and energy to understand those who look at the world differently to you makes you more intelligent, and whether you change or maintain your perspective, it ensures that whatever approach you choose to take, you are making a real choice.
×
×