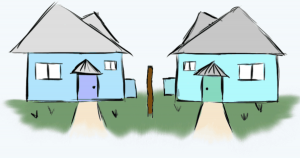 Given that the concept of an Eruv is to establish a symbolic home, the Rabbis were insistent that for any given Shabbat or Yom Tov period, a person can only have one symbolic home which means that they may only establish a single Eruv in a single place. The question raised in the Mishna (Eruvin 3:6, 38a) found in today’s daf concerns whether a person may have two different Eruvin, and thus two different symbolic homes, for a 48-hour period where Yom Tov & Shabbat are consecutive days?
According to Rabbi Eliezer, since this period contains two distinct sacred days, a person may establish two different Eruvin in opposite sides of the city and declare that ‘my Eruv for the first [day] is to the East [of the city], and for the second [day], it is to the West [of the city].’ However, the Chachamim disagree since they consider such a 48-hour period as being a single unit of sacred time with respect to Eruvin. Consequently, they rule that a person may only have a single Eruv representing a single symbolic home for this period of time.
Of course, there may be those who read this Mishna and consider the entire concept of two different symbolic homes to be a further expression of the rabbinic halachic imagination. But when I read this Mishna today, I was reminded of the many children and of my many students who – in a literal sense – have two homes given that their parents are separated or divorced and who, often within short periods of time including Chagim, move from one home to another and thus from one parental boundary to another.
For some parents and children, the sacredness and singularity of a 48-hour Shabbat & Yom Tov means that they make the choice for a child/ren to situate themselves in just one home, while there are others who see each day as having its own sacred identity and who therefore try and find ways for the child to spend time in a different home each of those days.
As we know, Corona has made travel for many people much more difficult, and given this, it has added a further layer of complication to the already complicated lives of many young people who live in – and between – two different homes.
For some children and parents, the necessity to stay in one place may provide them with physical, emotional and mental respite. But for others, it may cause them – and likely also the parent who is unable to spend time with them – considerable anguish.
Admittedly, I neither have advice or a solution for these complex dilemmas. But what I do know is – at least for some young people – the concept of having two homes is not an imaginary reality but is, in fact, their concrete reality, and it is one that is likely to be put under further strain as we approach the upcoming festivals.
×
×