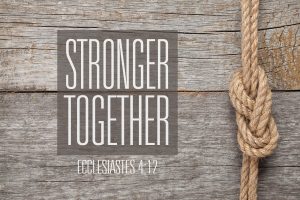 Kohelet 4:12 famously states that ‘a three- stranded cord will not quickly be broken’ – which is understood to teach us that a three-stranded cord has a level of strength far exceeding a single or two-stranded cord.
However, in todays daf (Eruvin 4b) we seem to encounter a quite different message. While we are told that a single strand of hair can be knotted so tight that it can inhibit mikveh water reaching all parts of the hair, we are also told that when three strands of hair are knotted, they are unable to be knotted so tightly to inhibit mikveh water reaching all parts of the hair.
In terms of the laws of mikveh, this is a ‘plus’ for multi-strand knots, but in terms of the concept of knots, it would seem that a single hair can be tied far tighter than one formed from three strands of hair. So how can it be claimed – as Kohelet does – that a three-stranded cord is stronger than that of a single strand?
To answer this conundrum we must distinguish between the strength of a knot and the tightness of a knot. True, a single knot can be tighter. However, a three-stranded cord, and a three-stranded knot, is stronger.
In general, a person is tightest with themselves. In fact, it is possible for someone to create such a tight bond with themselves, and to be so closed off from others, that they can inhibit anyone else from getting close to them – just like a single strand of hair that can be knotted so tightly that water is unable to reach the inner parts of the hair.
However, when a person allows others to tie bonds of friendship with them, though the bond of friendship cannot be as tight as the bond a person has with themselves, this can create a bond of strength of that far exceeds the strength of a single person.
There are those who us who are so in need of feeling safe that we knot ourselves so tightly that we become impervious – like the single knotted strand of hair that lets nothing through. But a major lesson of life is that we need to learn to trust others and that we shouldn’t be totally impervious.
And when we make that choice to let others come close to us, we quickly realise how powerful bonds of friendship can be – so powerful that ‘a three- stranded cord will not quickly be broken’.
×
×