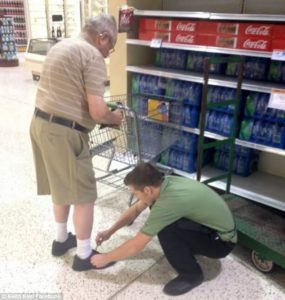 In today’s daf (Eruvin 43b), reference is made to the timing and the coming of Moshiach (the Messiah), and as the Gemara explains, we learn from Malachi 3:23 that this great and awesome day will be preceded by the arrival of the prophet Eliyahu (Elijah) whose task it will be to inform and inspire us about Moshiach’s imminent arrival. Yet as the Gemara points out, it may be possible for Eliyahu to be present in the world and yet for some of us to be unaware of his presence.
With this in mind, I would like to share a beautiful concept developed by Rabbi Daniel Cohen (in his outstanding talk at https://bit.ly/3kFP5cJ and in his wonderful book, ‘What will they say about you when you are gone?’) called ‘Elijah Moments’.
We begin in 18th century Poland when one of the students of the Baal Shem Tov felt that, after considerable preparation, he was deserving of a vision of the prophet Elijah (who – according to tradition – also appears to holy individuals). In response, the Baal Shem Tov instructed him to visit a certain town and ask to be hosted at the home of a specific family. “Make sure to bring them food,” the Baal Shem Tov added.
The student eagerly packed a wagon full of food and set off. Upon arriving, he was directed to an old, dilapidated house, the home of a poor widow with many young children. The student spent Shabbat with them and was only too happy to share his food with them. But Elijah never showed up.
The student returned back to his master disappointed, but the Baal Shem Tov then instructed him to try again the next week. Then, as he approached the door of the same house while carrying more food for Shabbat, he heard a child’s voice say, “But what will we eat on Shabbat?”, to which their mother responded, “Don’t worry. Just like Elijah came last week, he’ll come this week again!”
As Rabbi Cohen remarks, ‘the student set out to find Elijah in some remote location only to realize that Elijah lay within. It was in that moment of recognition when he realized that he was the one the family was waiting for. He was the agent of kindness. In that moment, he realized that he embodied a mission beyond himself.’
In his book, Rabbi Cohen gives a number of other examples of ‘Elijah Moments’, with a particularly striking story being that of a lady who told him: ‘A few weeks ago I was getting out of my car at the Big Y parking lot. Out of the corner of my eye I saw an elderly man with orthopedic shoes slowly exiting his car, and I noticed that one of his shoes was untied. I’m not sure what possessed me, but I went over to him and asked if I could help him tie his shoes as I knew it would be hard for him to bend down.’ With tears in her eyes she shared that in that instant she felt closer to God than ever before in her life, yet she wondered why even just telling her story was so emotional for her. Rabbi Cohen explained to her that, ‘in those few seconds, when she intuitively sensed her ability to become a messenger of God, her soul was on fire. It was her Elijah moment.’
As mentioned, it is the task of Eliyahu to inform and inspire us about Moshiach’s imminent arrival, and today’s daf explores the timing of the arrival of Moshiach. And it is on this point that I would like to share a story, found elsewhere in the Gemara (Sanhedrin 98a), which I remember every year towards the end of the Rosh Hashanah Musaf.
You will recall that the last song of the Rosh Hashanah Musaf is based around the word ‘HaYom’ (literally, ‘today’), and in this story, we also find that Hayom is a keyword when discussing when Moshiach will come.
The Gemara explains that, Rabbi Yehoshua Ben Levi once met Eliyahu and asked him, ‘When will Moshiach come?’. Eliyahu replied, ‘Go and ask Moshiach [himself]’.
R’ Yehoshua Ben Levi asked, ‘but where will I find him’, to which Eliyahu answered, ‘at the gate of the city’.
‘How shall I recognise him?’ asked Rabbi Yehoshua Ben Levi?, to which Eliyahu answered, ‘‘He sits among the lepers.. he changes their bandages.. one by one.’
When R’ Yehoshua Ben Levi met Moshiach he asked him ‘When will you arrive?’ to which he was told ‘HaYom (today)!’. But he didn’t come that day and R’ Yehoshua Ben Levi felt he had been deceived.
Thereupon Eliyahu explained to Rabbi Yehoshua that the Moshiach was speaking of the word ‘today’ as mentioned in the verse: ‘Today – if you will hearken to My voice’ (Tehillim 95:7), meaning that Moshiach can come any day if we repent.
What we learn from here is that each of us are given opportunities to be like Eliyahu; that Eliyahu’s mission is to inform and inspire us about Moshiach’s imminent arrival, and that Moshiach will come any day when we – individually and collectively – heed the voice of God and make the choice to be a messenger of God and thereby realise our ‘Elijah Moment’.
×
×