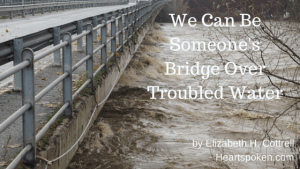 Towards the end of yesterday’s daf (Eruvin 43b), an innovative halachic solution was offered in response to a situation where someone had veered beyond their ‘techum shabbat’ and was now limited to his immediate 4-amot radius. Having heard about this situation, Rabbi Nachman suggested that a group of people surround this person – thereby creating a human enclosure between where he was and the space where he needed to be – which would then enable him to return back to within his ‘techum shabbat’.
Today’s daf (Eruvin 44a-b) continues this discussion and it considers the halachic efficacy of partitions and boundaries made of people – both in terms of the Shabbat boundary laws as well as the laws of Sukkot. Moreover, while doing so, the Gemara draws a distinction between humans who knowingly act as partitions and boundaries, and those who do so unknowingly.
Of course, on first glance, the idea that you would use a person as a partition or boundary seems very strange. But then I remembered a story I once read, and I then came to realise that this is – in fact – commonplace.
In terms of the story, there was a time in the 1960’s when there was considerable internal tension within Yeshiva Torah Vodaas between the two contenders for the position of Rosh Yeshiva. At the same time, an important dinner was soon going to be held, and given this, in order to avoid tension during the meal, the organisers seated Rebbetzen Sara Pam – who knew nothing of this conflict – between the wives of the two hopeful Roshei Yeshiva (nb. Rebbetzen Pam only became aware of all this when she innocently remarked to both how wonderful the atmosphere was and how delightful it was that the Yeshiva was always able to avoid internal conflict!).
In this case, Rebbetzen Pam had been seated in a way that she was – unknowingly – a human partition. Yet upon reflection, seating plans in classrooms and at simchas are often influenced by conscious or subconscious choices to place people between others so that they serve as a human partition to avoid tension or conflict.
But while we should certainly do all we can to avoid conflict, we should also do all we can to promote peace, and though the original solution of Rabbi Nachman seemingly speaks of creating a boundary of people, it actually describes an endeavour of creating a bridge made of people to help the individual who had crossed the ‘techum shabbat’ find their way back.
Ultimately, whether we realise it or not, when we are placed in settings or when we find ourselves in situations of tension or conflicts, we can either operate as a partition between people to prevent conflict, or as a bridge between people to enable understanding and foster peace.
In terms of applying this message, it is likely that there are those in our orbit who wish to make peace with friends or relatives with whom they have had tensions and conflicts throughout this year and perhaps even for many years, and it is possible that we are uniquely placed to help them do so.
Perhaps until now – knowingly or not – we have served as a partition between them to prevent further conflict. But, perhaps now, as we approach Yom Kippur, the time is right and ripe for them to reach out to make peace. And given our relationships with each, it is possible that we are in a unique position to be that human who is not a partition that separates them, but instead, the bridge that helps them reunite.
×
×