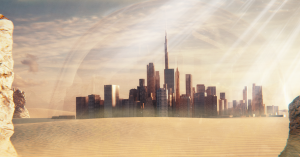 In today’s daf we are taught in a Mishna (Eruvin 4:4, 45a) that a traveler may designate a symbolic residence for themselves (e.g. a nearby city) for Shabbat which can be up to 2,000 amot from where they are presently located, without having physically visited this place before Shabbat, and without having placed an Eruv in that location before Shabbat.
Though, according to Rabbi Meir, this arrangement is only effective if the person consciously intended to designate that specific location as their symbolic residence for Shabbat, Rabbi Yehuda – whose opinion is the codified halacha – rules that we can rely on the presumption that had the traveler known that the place (e.g. city) was close by, they would have certainly designated it as their symbolic residence.
In order to prove the position of Rabbi Yehuda, the Mishna and subsequent Gemara relate how it once happened that Rabbi Tarfon was travelling on a Friday, and that he stopped by the road when darkness descended while unaware that he was within 2,000 amot of a city. In the morning, some local shepherds found him and let him know that the city was close by. Yet notwithstanding the fact that Rabbi Tarfon had not previously visited this city before Shabbat; nor had he placed an Eruv in that location before Shabbat; and nor had he consciously intended to designate that city as his symbolic residence for Shabbat, he walked to the city on Shabbat where he spent the rest of the day involved in Torah study.
As mentioned, this story comes to teach us that the halacha is in accordance with Rabbi Yehuda and that we can always rely on the presumption that were a traveler to know that a particular place is close by, they would have designated it as their symbolic residence for Shabbat.
Yet notwithstanding the fact that this story addresses the laws of Shabbat, within this story I see profound symbolism relating to the concept of ‘teshuva’ – which though often translated as ‘repentance’, I translate as ‘our spiritual need to strengthen our spiritual bond with G-d though making further commitments to living our life according to the will of G-d’.
Like Rabbi Tarfon, all of us are travelers in the journey of life, and like him, all of us experience challenging situations which bring us to a halt at a particular point in our spiritual growth – such that we spiritually fall asleep at whichever point in our journey that we have reached.
Had we checked a map, we would have realized how the possibility of living a life that is more spiritually fulfilling is within our reach, and we would have seen that teshuva is ‘something very close’ (Devarim 30:14) to each an every one of us. Still, like Rabbi Tarfon, we often find ourselves in unfamiliar situations and locations, and given this, we stop where we are while being unaware how close we are to the spiritual city of teshuva.
But just like Rabbi Tarfon who was woken up by the shepherds, we too are woken up – either by life-changing events, or by the voice of the shofar that we heard on Rosh Hashanah – which, as the Rambam (Hilchot Teshuva 3:4) teaches, comes with the message of, “Awake, awake, O sleeper, from your sleep; O slumberers, arouse yourselves from your slumbers; examine your deeds, return in repentance, and remember your Creator…”, and like Rabbi Tarfon who is told by the shepherds that the city is close by, these life-changing events and the sound of the shofar communicates the message that the spiritual city of teshuva is close by and is within our reach.
Imagine if Rabbi Tarfon had been told by the shepherds about the proximity of the city but simply for reasons of personal comfort decided to stay where he was, we would probably think he made the wrong decision.
Similarly, having sent the call of the shofar with the message of, “Awake, awake, O sleeper, from your sleep”, G-d is waiting to see what we do with His message and whether – unlike Rabbi Tarfon – we choose to stay where we are for reasons of personal comfort, or like Rabbi Tarfon, we choose to walk just a little further to the nearby spiritual city of teshuva.
×
×