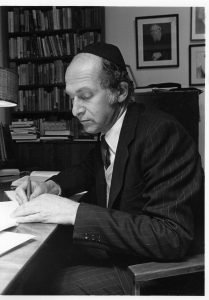 In particular, one of the most oft-cited halachic principles in such conversations is יחיד ורבים הלכה כרבים, meaning ‘where there is a disagreement between a single Torah scholar and many Torah scholars, the halacha is in accordance with the majority’.

In fact, this principle is so central to halachic discourse that when a book or teacher is summarizing the various opinions on a matter of Jewish law, they will inform the reader or listener that רוב הפוסקים – the majority of poskim (halachic decisors) – adopt a particular point of view and, by doing so, strongly suggest that the halacha is in accordance with these authorities (nb. whether it is possible to invoke the principle of ‘majority’ when summarizing various curated opinions found in the writings of halachic authorities living over a period of time is itself highly debatable).

However, today’s daf (Eruvin 46a) seems to challenge this principle in the context of its discussion about the lenient position of Rabbi Yochanan Ben Nuri as presented in the previous Mishna (Eruvin 4:5, 45a) where we are told that הלכה כדברי המיקל בעירוב – ‘the halacha follows the lenient opinion in the laws of Eruvin’ which, as Rava explains, applies even though this is the minority position.

In response, the Gemara provides a series of examples which challenge Rava’s claim that in all similar matters of Rabbinic law we do not distinguish between the majority and minority view. Yet while these examples successfully demonstrate that the majority view is generally given greater weight even when it is in opposition to a minority view, Rabbi Asher Weiss concludes from our daf that, ‘the entire premise….that the halacha is in accordance with the majority is seemingly not a hard-and-fast rule of the Torah and may not necessarily be an absolute rule at all’ (Responsa Minchat Asher Vol. 2 p. 181).

What we learn from here is that while our Sages often summarized general rules in simple statements, these rules may apply generally but not always, and many of these rules are undoubtedly far less simple than meets the eye.

In his tribute to the late Rabbi Aharon Lichtenstein zt’’l, Rabbi Shalom Carmy explained that what made R’ Aharon special was that he was able to blend complexity and clarity. In particular, he explained that, ‘an appreciation of complexity (murkavut) is not the same as needless complication (histabechut). To the contrary, intellectual clarity dispels the mental clutter that obstructs decisiveness and clouds judgment.’

With this in mind, my hope for the coming year is that I too am able to maintain an awareness and sensitivity to the complexity of Jewish law and human behaviour, while still achieving some clarity in terms of my relationship with both.