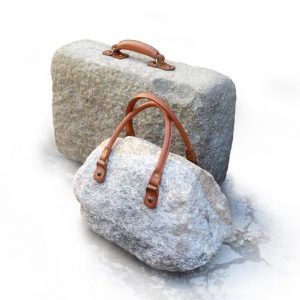 Today’s daf (Eruvin 48a) begins by quoting a Beraita taught by Rabbi Chiya stating that where a water-filled ditch separates between the Shabbat boundary of two towns, an iron partition must be placed in the water in order to divide the water of one town and that of the other so that residents of both towns could draw water from there on Shabbat.

Upon hearing this Beraita, Rabbi Yossi the son of Rabbi Chanina laughed out loud – as if to communicate that this Beraita shouldn’t be taken seriously. However, for reasons not clearly stated on the daf, he did not explain why he reacted this way, or why he thought that the Beraita taught by Rabbi Chiya seemingly contained flawed halachic logic.

It is important to note that Rabbi Yossi was hugely respected Talmid Chacham and given this, his reaction piqued the curiosity of the editors of the Gemara. And this is why much of Eruvin 48a is dedicated to answering the question of, ‘Why did Yossi the son of Rabbi Chanina laugh?’.

The first suggested answer relates to a prior debate about the notion of residence for ownerless objects (which, in this case, is water). According to this reading, the Beraita taught by Rabbi Chiya presented the stricter position on this issue, whereas Rabbi Yossi was of the opinion that the more lenient position was correct. Still, asks the Gemara, ‘since when do we laugh at people who teach a stricter position?’.

The second suggested answer posits that perhaps Rabbi Yossi thought that since water is a moving fluid, it is impossible to establish halachic residence for water on Shabbat. However, as the Gemara explains, this would apply to a spring or stream, but not to a lake or a ditch.

The third suggested answer considers the possibility that Rabbi Yossi laughed because even an iron partition would allow some water to move from one side of the ditch to the other and thus the entire enterprise would be ineffective. However, the Gemara then explains that it is possible to read the Beraita in a way that demonstrates the impossibility of establishing a partition in water for precisely this reason.

Finally, the Gemara identifies a sufficiently compelling rationale as to why Rabbi Yossi reacted this way based on the general principle that ‘the Sages were lenient about [the types of Eruvin surrounding] water’ since water is such a basic human requirement. Consequently, Rabbi Yossi laughed at the Beraita as if to say, ‘there is no way that this is an authentic Beraita since the huge human effort that it suggests must be performed in order to partition and thereby enable human access to water on Shabbat is not reflective of the spirit of halacha as expressed by the principle that, “the Sages were lenient about water”’. Simply put, Rabbi Yossi laughed because this Beraita did not express the human-sensitive ethic of halacha that he knew to be true.

Before proceeding, it is essential to point out that while nobody doubted that Rabbi Yossi’s reaction was based on an intellectual understanding of halacha, the Gemara expended considerable effort in providing an intellectual explanation to his seemingly instinctive emotional reaction to the Beraita taught by Rabbi Chiya, and this serves as a profound message to our generation – where emotions alone are often considered sufficient responses to ideas – that we must probe and make sense of ‘why’ we and others react the way we do, and not merely presume that an emotional reaction is a sufficiently clear response to a specific statement or event.

However, there is also a second lesson we can learn from this Gemara – and especially from the conclusion that Rabbi Yossi laughed because this Beraita did not express the human-sensitive ethic of halacha that he knew to be true. But in order to explain this, I’d like to share a powerful parable from the Dubno Maggid (Rabbi Yaakov Krantz, 1741-1804) as retold by Rabbi Paysach Krohn (The Maggid Speaks p. 249):

“A dealer in precious stones once went out of town on business. He had with him a suitcase filled with his wares – diamonds, rubies and emeralds – to show to potential buyers. When he came to his hotel, he was assigned a room on the fourth floor and the hotel clerk summoned the porter and asked that he carry the businessman’s suitcase up to his room. When the businessman came to the room, he found the porter waiting for him while huffing and puffing from exhaustion: “That was one heavy suitcase!”, the porter complained. “I’m collapsing – what do you have in there – rocks?!”. To this, the businessman replied, “if you are tired, you must have picked up the wrong suitcase. Mine is filled with diamonds and precious stones which are lightweight; they wouldn’t tire anyone out! You probably took someone else’s suitcase and that is why you’re so tired.” Explaining this parable, the Dubno Maggid remarked that if Jewish observance is exhausting for us, we’re probably not carrying the right load – meaning that we’ve probably been mistaught, or have misunderstood, the burden of halacha. In this same spirit, it seems that Rabbi Yossi laughed because the Beraita cited by Rabbi Chiya communicated a false interpretation of halacha – one that was burdensome and almost impossible to fulfil.

Unfortunately, I know of far too many people who have received or who have been transmitted an understanding of Judaism which reflects a world of iron partitions and which is as burdensome to them as a suitcase full of rocks. Yet unlike Rabbi Yossi who probably encountered such teachings very rarely, I don’t laugh. Instead, precisely because this is so prevalent in our generation, and precisely because the human cost of such miseducation is so clear to those of us who are familiar with trends in Jewish communities around the world, this genuinely brings me to tears.

Given this, if you think that you’re carrying a heavy burden of Judaism, please don’t reject it. Instead, I urge you to commit yourself to find a teacher who can explain which parts of what you know are diamonds, and which parts are rocks that have been mistaught as diamonds – because if your Judaism is exhausting you, you’re probably not carrying the right load.