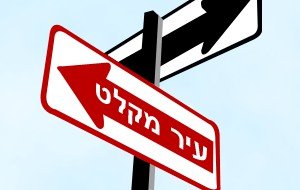 In attempting to provide a biblical support for the rabbinic concept of the 2,000 amot Shabbat limit, today’s daf (Eruvin 51a) contains a fascinating Gezeira Shava (word association) ‘chain’ and an even more fascinating association between two seemingly disconnected areas of Jewish law.
We are first told that an allusion to the 2,000 amot rule is found in Parshat BeShalach (Shemot 16:29) where, having been told that the manna will fall for six days and that a double portion will fall on Friday, the people are then instructed that, אל יצא איש ממקומו – ‘no one should leave their place [of residence]’ on Shabbat.
However, while our Sages claim that the word מקום, meaning ‘place’, is suggestive of the 2,000 amot limit, this is not explicit in the Torah. Instead, we are told that this is understood from a series of word-associations from the laws of the Arei Miklat (Cities of Refuge).
Specifically, we are told (see Shemot 21:13) that the accidental murderer shall be sent to a place (מקום) where they could flee (ינוס) from the relatives of those whom they accidentally killed. Moreover, we are told (Bemidbar 35:26) that if the accidental murderer who had fled (ינוס) to the Ir Miklat (city of refuge) chose to leave the border (גבול) of that city, and stepped beyond that border (גבול) in a region outside (מחוץ) the city (ibid. 35:27), then they are putting themselves at risk from the relatives of whom they killed. Significantly, we are told in Bemidbar 35:5 that outside (מחוץ) each Ir Miklat was a border of fields stretching 2,000 amot in each direction from the city. From here we have our Gezeira Shava (word association) ‘chain’ from מקום (speaking about how far a person may walk on Shabbat), via the word ינוס, the word גבול, and the word מחוץ, from where we learn that this is defined as being a distance of 2,000 amot.
It is important to state that this Gezeira Shava ‘chain’ is not considered by most commentaries to be an absolute proof. Instead, it is a ‘support’ which provides a biblical allusion to an already conceived halachic concept. Nevertheless, the association between how far we may walk on Shabbat and the risk associated with an accidental murderer who leaves their city of refuge is undoubtedly curious.
Yet, for Shabbat observers, the association is less absurd than necessarily meets the eye. Like an Ir Miklat, where the accidental murderer is protected from the dangers lurking beyond its borders and is also given the opportunity to learn and spiritually grow from the Levi’im whose task it was to teach the residents of those cities, so too, Shabbat both protects us from the many challenges we encounter during the week, and affords us with more time to learn Torah and spiritually grow.
Ultimately, Shabbat is our city of refuge which we run towards on a weekly basis with the knowledge that whatever we may have done beyond its borders, it will provide us with both physical and spiritual protection, while giving us the time to learn, reflect, and develop our emotional and spiritual tools so we can deal with whatever we encounter once we leave it.
×
×