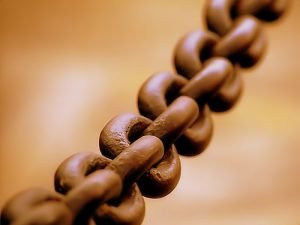 Having been taught in yesterday’s daf that the techum Shabbat may only be measured with a 50-amah rope, today’s daf (Eruvin 58a) cites a teaching of Rabbi Yehoshua Ben Chananya stating that ‘there is nothing more suited for measuring than iron chains.’

As the commentaries explain, this means that in contrast to rope which stretches under strain, iron chains cannot stretch. Given this, if accuracy of measurement is so crucial to measuring the techum Shabbat, surely a 50-amah iron chain would be a better measurer than a rope?

However, as Rabbi Yehoshua Ben Chananya proceeds, ‘[notwithstanding this fact], this is what we should do since we are taught [in the book of Zechariah 2:5 that when the third Temple will be rebuilt, its boundaries will be measured by a man] “with a measuring rope in his hand”’.

Of course, beyond the biblical prooftext offered by Rabbi Yehoshua Ben Chananya, it is possible to argue that the requirement for using rope rather than a chain was merely one of practicality since it would have been much easier to procure a 50-amah rope than a 50-amah iron chain. Moreover, carrying the chain to the different borders of a city would have been a significant strain. Still, I believe that there is a deeper lesson being taught here.

Though ropes had many uses, iron chains were previously used on prisoners as physical restraints. For example, Tehillim 149:8 speaks of ‘binding their kings with shackles and their nobles with chains of irons’. Given this, I believe that embedded in the requirement to use a rope rather than chain was a sensitivity not to use objects for halachic purposes that carry a negative or threatening message.

Significantly, this idea of iron carrying a negative or threatening message is repeatedly stated in the Torah with respect to the halacha that the Mizbeach (altar) should not be formed by using iron tools. For example, in Shemot 20:22 we are taught ‘you shall not build it of hewn stone, for if you lift up your tool upon it, you will have profaned it’. Similarly, Devarim 27:5 states that ‘and there shall you build an altar to the Lord your God, an altar of stones; you shall not lift up any iron tool upon them’, and in reference to the First Temple, we are told in Melachim I 6:7 that ‘when it was built, was built of stone made ready before it was brought there, so that there was neither hammer nor axe nor any tool of iron heard in the house’. Explaining this law, the Mechilta (on Shemot 20:22) quotes a teaching from Rabbi Shimon ben Eliezer that, ‘the altar was created to prolong man’s days, and iron was created to shorten man’s days. Consequently, it is not permitted that that which shortens [life] should be lifted against that which prolongs [life].’

Applying this lesson to the laws of measuring a techum Shabbat, though an iron chain may have been a more accurate measuring tool than a rope, its usage would have conveyed a message of imprisonment with respect to the concept of techum Shabbat – which our Sages would have undoubtedly wished to avoid.

Extending this idea even further, there are times in our lives when certain mitzvot may be performed in the ‘wrong way’, such that they convey a meta-message of restriction, imprisonment, or the shortening of life, rather than a message of celebration, freedom and the lengthening of life. Though each of us can think of our own examples, one clear example – relevant to our current festival – is how it is possible for a sukkah to feel more like a restrictive closed-in box than like a temporary dwelling that fosters feelings of joy. However, if this is how it feels, then I believe this is comparable to using an iron chain for measuring the techum shabbat, or using hewn stone to build the altar.