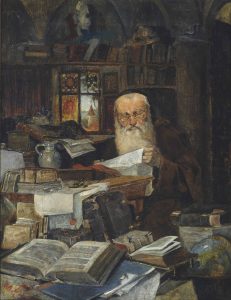 In yesterday’s Mishna (Eruvin 5:6, 59a) we were taught that in order to construct an Eruv for a town that was previously publicly owned which then became privately owned, a small section of the town had to be left outside of the Eruv.
In theory such a demand sounds simple to achieve, but as today’s daf (Eruvin 60a) demonstrates, since Eruvin must take human, social and halachic factors into consideration, their construction is anything but simple.
We are told that a group of residents of Kakunya (a town in Babylon) came to Rabbi Yosef to ask that he send a Torah scholar to their town to construct an Eruv for their town. Hearing this request, Rabbi Yosef turned to his student Abaye and instructed him to, ‘go and make an Eruv for them, and see that [what you do doesn’t cause disappointment or controversy] such that it would prompt [the residents of Kakunya] to come and complain in our Beit Midrash’.
Before proceeding, it is of considerable significance that Rabbi Yosef was concerned – even prior to Abaye arriving at Kakunya – that the construction of an Eruv might upset or disappoint some residents of Kakunya. Yet knowing Abaye’s brilliance, we would have expected him to simply go to Kakunya, coordinate the construction of the Eruv in accordance with his deep understanding of halacha, and leave.
But this is not what happens. Instead, we are given a rare glimpse of the back and forth that goes on in the mind of a posek and are told of the pro’s and con’s of different Eruv solutions – and their halachic & social cost/gain ratio – that Abaye considers in order to meet the specific needs of the residents of Kakunya.
Yet aside from halachic and social factors, it is also clear from Abaye’s observations that he was concerned that the people of Kakunya might compare their Eruv with that of Mechuza or Pumbedita (notwithstanding the fact that the physical layout of Kakunya differed greatly from that of Mechuza and Pumbedita) and feel disappointed. Perhaps they would claim that Abaye was too strict as compared to the scholars who made those other Eruvin? Or perhaps they would claim that he didn’t need to exclude a certain part of the town? As Rabbi Moshe Englard rightly explains in his ‘Petach HaEiruv’, ‘in this Gemara we learn about the challenges that face those involved in constructing Eruvin – [both in previous generations, and] even till today!’.
There are those who would have us think that halacha is mostly a science, with the only artistic element of halacha being the judgement calls that need to be made between different existing halachic positions and perspectives. Personally, I take a different view, and though I fully acknowledge the centrality of texts, precedents and facts in halachic decision-making, I also believe that in order to answer certain questions in a manner that satisfactorily addresses the needs of the questioners, there is an art to halachic decision-making that includes not only halachic considerations, but human and social factors too.
And I think that today’s daf, involving Abaye and the residents of Kakunya, provides us with a masterclass in how this can be done.
×
×