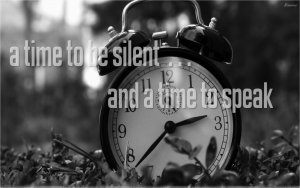 In his interpretation of Mishna Eruvin (6:8, 73a), Rav explains that a מבוי (an alleyway adjoining a public domain) can only be transformed into a private domain by use of a לחי (a sidepost) or קורה (cross-beam) at its entrance, if houses and courtyards open onto the מבוי.
However, we are told in today’s daf (Eruvin 74a) that Shmuel disagreed with this position and he ruled that even if the מבוי has access to just one house and one courtyard, then this is sufficient to establish the מבוי as being capable of the halachic transformation achieved through the use of a לחי or קורה.
The problem is, as the Gemara proceeds to explain, Shmuel’s ruling seemingly conflicts with an explicit Mishnaic teaching. Given this, Rabbi Elazar subsequently went to Shmuel’s home to challenge him on what he had taught. But when Rabbi Elazar made this point to Shmuel, Shmuel did not respond.
As is evident from the subsequent discussion, it is not obvious what to make of Shmuel’s silence. Is he affronted by the question and wishes to stand his ground? Or is he unable to respond to the question and thus his silence suggests that he now wishes to retract his teaching? As the Rosh (commentary on Beitzah 1:6) points out, sometimes silence means the former, and sometimes the latter.
Applying this more broadly, I believe that there are occasions in life when it is preferrable not to immediately respond to difficult questions which others pose to us, and that there is wisdom in taking the time for thinking and reflection before responding to a thoughtful question relating to our beliefs.
At the same time, just as we are told that there is ‘a time to be silent’ (Kohelet 3:7), we are also told that there is also ‘a time to speak’, which means that our failure to respond to thoughtful questions can lead to confusion and misunderstanding.
Ultimately, sometimes we can speak too quickly which can lead to abrupt and thoughtless responses, and sometimes we can fail to speak which can lead to ambiguity and can foster misinterpretation.
And this is why knowing when is ‘a time to be silent’, and when is ‘a time to speak’, takes so much wisdom.
×
×