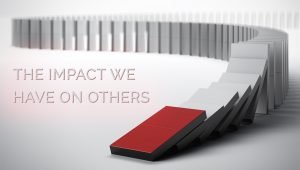 Towards the end of todays’ daf (Eruvin 79b) we are taught three rulings from the Elders of Pumbedita – whom we are told in Sanhedrin 17b were Rav Yehuda and Rav Eina, and whom we are told in Chagigah 13b were proficient in understanding the mystical teachings about creation known as ‘Maaseh Bereishit’. However, in terms of the three teachings found in our daf, at least on first glance each seem very mundane.

One first glance these three teachings seem unrelated. But upon closer inspection, each speak of performing specific acts that positively impact, enrich and enhance the lives of others. In the case of the Eruv, the proxy performs a deed which then enables both themselves and others to carry in a neighbourhood. In the case of kiddush, by reciting the words and drinking the wine, the person making kiddush fulfils the duty not only for themselves but also for all others present. And in the case of lighting the fire, the kindling performed by one person radiates and warms the mother and her newborn baby.

We are taught in Gemara Shevuot 39a that כל ישראל ערבים זה בזה, ‘all of the people of Israel are spiritually interconnected’, which is the theological and halachic underpinning for actions performed by one person which positively affect others, and in various ways, all three of the rulings taught by the Elders of Pumbedita are demonstrative of כל ישראל ערבים זה בזה. However, perhaps the clearest expression of ערבות (spiritual interconnectedness) is the ערוב – which is a symbolic physical act that has the potential to dramatically enhance physical and spiritual interconnectedness.

Rather than being mundane, it seems that these three rules each speak of this profound concept of ערבות as it applies in various different settings. And understood this way, perhaps it comes as no surprise that the Elders of Pumbedita – whom we are were proficient in ‘Maaseh Bereishit’ – taught these three rules, because inherent in each of them is a profound message, learnt from God’s benevolence inherent in creating the universe, of performing kindness to others and of the impact that our deeds can have on the lives of others.