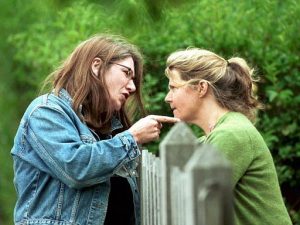 We have previously noted (see Eruvin 71b and my commentary on that daf) that while various foodstuffs may be used to establish an Eruv Techumin, and while wine can be used for an Eruv in order to merge courtyards (i.e. shitufei mevo’ot), an Eruv Chatzeirot – which binds houses into a collective unit – is only made from bread.
In the Mishna found at the end of yesterday’s daf (Eruvin 7:10, 80b), Rabbi Eliezer taught that an Eruv [Chatzeirot] could be made with ‘all food’, while Rabbi Yehoshua insisted that only a loaf of bread may be used, and as we see in today’s daf (Eruvin 81a) this debate is interpreted to mean that Rabbi Eliezer was of the belief that an Eruv Chatzeirot could even be made from a broken loaf of bread, while Rabbi Yehoshua insisted that only a whole loaf may be used.
But why, asks the Gemara, does Rabbi Yehoshua think that a broken loaf is an invalid Eruv? Rabbi Yossi the son of Shaul says in the name of Rebbi that this is because of איבה – meaning the likely ill will that will occur when some residents contribute whole loaves, while others only contribute broken loaves.
On first glance this ruling of Rabbi Yehoshua seems unnecessarily strict, and as the Rashba points out, his position seems to conflict with the general rule of thumb that when it comes to the laws of Eruvin we generally adopt the lenient view. However, given that the essential function of an Eruv Chatzeirot is to bind houses into a collective unit, Rabbi Yehoshua was of the belief that we should avoid doing things that are likely to lead some neighbours to resent the contributions of others by saying, ‘I gave a whole loaf, but you just gave broken pieces!’.
Interestingly, the term איבה is often used in rabbinic literature to describe what Jews have been permitted to do in order to avoid upsetting, angering or provoking non-Jewish neighbours or leaders, and on numerous occasions throughout our history our Sages have made proclamations to permit certain actions due to איבה – meaning in order to avoid anti-semitism or persecution. Yet it is of significance that here, the word איבה is used with respect to Jewish neighbours (in fact, some commentaries actually use the phrase איבת השכנים – ill will among neighbours).
Quite often Jews worry about איבה and how their actions will be viewed and interpreted by non-Jews. Yet while history has proven that this is a very valid concern, what Rabbi Yehoshua comes to teach us is that though local arguments can often be petty, we should also concern ourselves with איבת השכנים and how our fellow Jews view and interpret our actions. Given this, we should do all we can not only to avoid stirring ill will beyond Jewish communities, but also in them too.
×
×