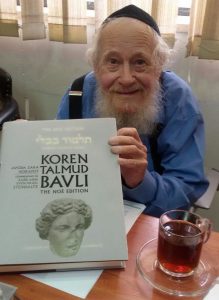 If I had to identify a Talmudic debate that captures the spirit of Talmudic legal reasoning, it would probably be the first Mishna in Massechet Bava Metziah which examines the claim of ownership of two people who are holding one side of the same Tallit and who are both claiming ‘I found it, and it’s mine!’.
Yet while the laws of Eruvin seem very different to those of finding and possessing lost objects, today’s daf (Eruvin 84a-b) speaks of a very similar issue. Specifically, if two private homes that have not made an Eruv together each have access to a domain on Shabbat, to which property is that domain considered to belong?
Based on the previous Mishna (Eruvin 8:3, 83b) we learn that the home with easier access to that domain is considered to be connected to it, and in today’s daf we are presented with a variety of architectural permutations to which the fundamental question asked of each is: ‘which of these two constructions has easier access to the shared domain?’.
However, beyond its application to the laws of Eruvin, there is a further lesson we can learn from this insight, because if a property with easier access to a domain is considered to be connected to it, then it seems clear that a powerful way to help people feel connected to particular places, spaces and experiences is to increase and ease their access to those places, spaces and experiences.
Of course, this principle applies in so many areas of life. However, a compelling example of this principle relates to the extraordinary transformation that has occurred in recent years, enabled by the generous donation of the William Davidson Foundation, to provide the world with free access to the Steinsaltz English translation of the Talmud on the Sefaria website & app. And by providing easy access to the words of the Talmud in an accessible language, huge numbers of women and men around the world now feel a direct connection to the words and the world of the Talmud, and are making Talmud study part of their domain. And by doing so, they are also communicating that they are part of its domain too.
×
×