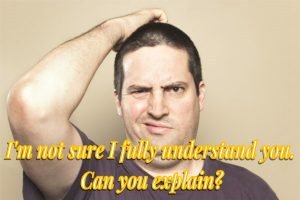 As part of its ongoing debate examining the halachic position of Rav concerning the use of airspace, today’s daf (Eruvin 85a-b) notes that Rav Nachman quoted Rabbah bar Avuha who himself was quoting Rav that in a situation where there are three ruins between two houses, each house has rights to the airspace over the ruin closest to it, while the middle ruin is forbidden for use by the residents of both houses.
If we presume, as did the Talmudic scholars debating this point, that the three ruins sit parallel to one another, then this ruling suggests that shared airspace can be restricted. However, as the Gemara explains, this conclusion seemingly conflicts with a prior and extensively debated halachic position of Rav.
In light of this, when Rav Brona repeated the above-mentioned ruling in the name of Rav, Rabbi Elazar was shocked and he exclaimed in astonishment, ‘Did Rav actually say this?!’. Having received confirmation from Rav Brona, Rabbi Elazar then decided to go to Rav’s home in order to make sense of this conflicting teaching.
‘Did the master say this?!’, asked Rabbi Elazar. To which Rav said ‘Yes!’. Rav Elazar then explained to Rav why this made no sense to him, to which Rav responded: ‘Do you think [that in the case you were taught concerning three ruins that sit between two houses], the ruins are parallel to one another? No! Their layout is like a tripod (i.e. between the two houses are two ruins, and adjacent to those two ruins is a further ruin which extends from one house to another) [and consequently, the whole debate about the usage of the third ruin is for reasons altogether different than airspace]’.
What we see here is that those debating the words of Rav had presumed that he was discussing a specific configuration between two houses and had therefore drawn their own conclusions about his halachic position, while – upon being challenged by Rabbi Elazar – Rav explained that this was not what he had been speaking about and that the conclusions that others had deduced about his halachic position from the way they had interpreted his statement were simply false.
It is important to note that in this case there is no suggestion that those who had misinterpreted Rav’s statement had done so deliberately or out of malice. Nevertheless, what we learn from here is that even well-meaning people who hear what another has said can often draw fundamentally flawed conclusions about the meaning and intention of what that other person has said.
Sadly, too many of the debates that we should be having nowadays about things that truly matter are often based on what we hear others are saying and not actually based on what they are actually saying; too much on what we presume is their vision, rather than what their vision truly is. Rather than hearing what other people are actually saying, we overlay our interpretation onto their words, and then attack them for the conclusions that we have drawn from our spin of their position.
Of course, at times this is not done deliberately or out of malice. But there are times when it is. Still, whatever the intentions of all those involved, nothing constructive emerges from such exchanges because – if we were true to ourselves – we would admit that these aren’t real exchanges at all.
And how can we escape this vicious circle of misunderstanding? By emulating Rabbi Elazar, by asking questions, and by having the patience to hear what others have to say which may lead us to the conclusion that – perhaps – we had been misunderstanding someone else’s position all along.
×
×