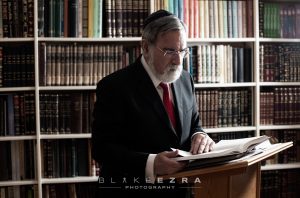 Yesterday, for the first time in over five months, I did not post a Daf Yomi thought, and this is because I, like so many others around the world, was still in shock having learnt about the death of Rabbi Lord Jonathan Sacks zt’l from whom – both personally, and from his many books – I was privileged to learn so much. Still, while I may have had a valid reason not to write yesterday, I don’t have a valid reason for today’s thought not to touch upon both yesterday’s daf (Eruvin 91) and today’s (Eruvin 92), and this is what I have attempted to do – while relating the concepts and cases found on these dapim to Rabbi Sacks and his influence on me and so many others.
The Mishna (Eruvin 9:2, 92a) discusses the case of a large roof that is adjacent to a small one, as well as the case of a large courtyard that is adjacent to a small courtyard. In both instances, no physical wall or physical partition separates the two. However, while in the case of the large roof and the large courtyard where each are considered to be distinct domains since each have a halachically valid virtual partition surrounding their entire area, both the small roof and the small courtyard are – at that moment – not considered to be fully-fledged distinct spaces as they lack a halachically valid virtual partition surrounding their entire area.
Given this, Rabbah, Rabbi Zeira and Rabba Bar Rav Chanan rule that ‘the domain of the large [courtyard] extends into the small [courtyard]’ – meaning that while the small courtyard is its own space but at that moment lacks certain qualities and properties, its attachment to the larger courtyard means that it can benefit from its proximity to the larger space, and as the Gemara proceeds to explains, this principle has a variety of applications including how produce is grown in the small courtyard, or how prayers recited in the small courtyard can attach themselves to the community in the large courtyard.
In terms of Rabbi Sacks, he was a ‘giant’ – both in terms of his intellect and in terms of his scholarship. Yet, not only was he abundantly generous to give his time, encouragement and support to so many others who were comparatively much ‘smaller’ in terms of wisdom and scholarship, but like the roofs and courtyards discussed in today’s daf, he did so without walls or partitions i.e. without pretenses (nb. among the many random memories I have of him is when I, along with a number of other young teachers, were hosted at his home in Hamilton Terrace to discuss how to address issues of prayer and spirituality in schools, he insisted on pouring and serving the tea to each of us).
Rabbi Sacks wasn’t just interested in what he could teach others, but also what he could learn from others. He wasn’t focused on growing himself, but instead, on growing others. He wished to do all he could to help and encourage others, and we – his disciples – were blessed to benefit from his generosity such that ‘the domain of the large extended into the small’.
However, to compare Rabbi Sacks to a roof or a courtyard is also a misrepresentation, because it presumes that he can be compared to a space that doesn’t move. However, Rabbi Sacks was quite the opposite! He had an abundant unstoppable energy that was driven by his recognition that we are living in challenging times and that we must do all we can, and answer God’s call, to share ideas of Torah and morality around the world. Like Rabbi Yehuda testifies (in Eruvin 91a) about times of danger when he would ‘carry a Torah scroll from a courtyard to a roof, and from there to a courtyard, and from there to a Karpaf in order to read Torah’, Rabbi Sacks would travel wherever was necessary to make sure that the voice of Torah and morality could be heard.
Along these lines, I recall some years ago when a good friend of mine, who at that time was a Rabbi for young professionals, consulted Rabbi Sacks about whether it would be appropriate for him to deliver shiurim in more informal settings like restaurants or bars to help connect with the young people who he sought to engage with. In his reply, Rabbi Sacks referred him to Shmuel I 7:16 where we read how Shmuel ‘would travel year after year’ across the country to encourage and inspire the people, and in this spirit, he explained that my friend should be prepared to do the same.
Ultimately, the concept of Eruvin is about strengthening community and also about making room for the other, and given this I shall end this piece with one brief yet stunning insight from Rabbi Sacks who explained that ‘whenever Jews pray, we end with a prayer for peace, and at that point we take three steps backward. To make peace you have to make space for someone else. You have to give up a little of your dream for the sake of someone else’s dream’ (From Optimism to Hope p. 18).
He did this for so many of us, and this is what we must continue to do for others as well.
×
×