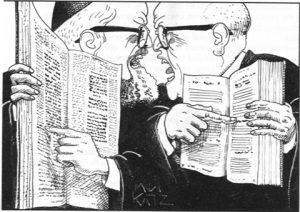 Towards the end of today’s daf (Eruvin 93b), Rav Hoshaya raised the question about the case of a large courtyard that is adjacent to a small courtyard, where the boundary between the two was breached on Shabbat. In such an instance, does the fact that there was an established Eruv around both courtyards on Erev Shabbat mean that it is still possible to carry in the merged courtyard once the breach has occurred? Or does the breach mean that the respective Eruvin are rendered invalid and therefore, carrying is forbidden in the merged space?
In attempting to answer this question, Rav Chisda makes reference to the previous Mishna (Eruvin 9:2, 92a) which speaks about the case of ‘a large courtyard that was breached into a small one’ with its conclusion being that carrying from the small courtyard to the larger one is prohibited, and he suggests that the Mishna could be interpreted as referring not just to a situation where the breach occurs in the weekday, but also on Shabbat. According to this interpretation, the answer to Rav Hoshaya’s question would be that the respective Eruvin are rendered invalid and carrying is therefore forbidden.
To this, Rabbah replied, ‘אימר – “let’s say” [that the Mishna is dealing with a case where] it was breached while it was still day (i.e., on Friday before the onset of Shabbat, while if such a breach occurred on Shabbat itself, the Eruv would not be compromised and carrying would be permitted).’
However, Abaye then challenged Rabbah, stating, ‘the Master should not state: אימר – “let’s say” [indicating that it is possible to interpret the Mishna as referring to a breach that occurred on a weekday, while it is also possible to interpret it as referring to a breach that occurred on Shabbat]. Instead, you (i.e. Rabbah) should have said, ודאי – “certainly” [the Mishna is referring to a case where the courtyard was breached] while it was still day (i.e. before the onset of Shabbat), [while if such a breach occurred on Shabbat itself, the Eruv would not be compromised and carrying would be permitted]’.
In terms of the debate between Abaye and Rabbah, Rabbah validated the possibility – as suggested by Rav Chisda – that the Mishna might be referring to an event that occurred on Shabbat, but could also be read as if it was not, while Abaye believed that Rav Chisda’s reading was incorrect and that Rabbah should have been more assertive in making it clear that the Mishna couldn’t be read in this manner. What we see from here is that there are times when the reluctance to directly challenge another person or position out of the concern that this may upset or offend them can lead a person to be unnecessarily – and at times unhelpfully – ambiguous about things that they need to present with clarity.
Interestingly, just last week I encountered a situation like this. Someone I know had written an article about halachic decision-making, within which she made veiled reference to a position that she thought was fundamentally wrong. The problem, however, was that the reference was so veiled that only a handful of people could make sense of what she was referring to.
Given the topic being discussed was one close to my heart, I wrote to the author and asked why, if she so strongly believed in taking a stand, was she so ambiguous in what she actually wrote? She replied that she didn’t want to offend the person she was disagreeing with. To this, I responded by explaining that it is possible to critique an idea without seeking to offend a person, and that if we aren’t prepared to directly challenge those ideas which we think are fundamentally incorrect, then all we do is add further ambiguity to the conversation.
Significantly, this issue is addressed in Rabbi Sacks’ zt’l most recent book ‘Morality’ where he states that ‘a free society depends on the dignity of dissent’ and – while referring to the principle of ‘argument for the sake of heaven’ – he explains that ‘Judaism itself is predicated on this principle’. Sadly though, ‘the dignity of dissent’ is a rare commodity in today’s society.
Yet, as Rav Yuval Sherlow explained in the eulogy he delivered for Rabbi Sacks zt’l, not only did Rabbi Sacks write about the concept of the dignity of dissent, but he modelled it as well, and he was able to strike a powerful balance between principle and pleasantness – speaking truth while loving people; addressing issues of vital importance, but speaking in a pleasant and non-confrontational manner.
Today, too many of us hold back from saying what we hold dear for fear of offending others. However, while such respect – on its own – is admirable, silence or veiled speech can lead to halachic (as in today’s daf) or moral ambiguity. True, finding the right balance is difficult. But through his insights, his teachings, his books and his example, Rabbi Sacks showed us how we can argue for the sake of heaven – and it is up to us to continue his legacy of doing so.
×
×