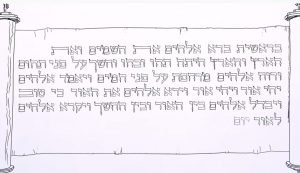 The Mishna in today’s daf (Eruvin 10:2, 95b) presents the creative halachic solution of Rabbi Shimon which was seemingly offered in response to a scenario where someone finds a religious article, such as a pair of tefillin, on Shabbat in a public domain where carrying is forbidden.

In terms of his solution, Rabbi Shimon ruled that a human chain may be created which avoids carrying, whereby one person takes the item and gives it to someone else (while avoiding walking more than 4 amot), who then passes it to someone else etc. until the item reaches ‘the outermost courtyard of the city’. What we learn from here is that when people are placed in the right location, they can enable the transportation of items over a long distance.

Significantly, this solution was previously used by communities when transporting a Sefer Torah from a home to a shul. However, since the Tana Kamma of the Mishna did not endorse this solution, and since the Shulchan Aruch (Orach Chaim 349:3), though citing it as the default (‘stam’) opinion, also cited other authorities who disagreed (‘v’yesh’), the Taz (see his commentary on OC 349; see also Mishna Brura on OC 349 note 13) ruled that doing so was improper. However, as the Biur Halacha explains (on OC 349), a compelling argument can be made in response to the Taz’s objections which would thereby grant permission to carry the Sefer Torah in this manner.

I mention all this in light of the events of this week where, following the death of Rabbi Jonathan Sacks zt’l, many people around the world have been sharing insights and stories of his Torah that they have learnt from him directly or from his wonderful books.

Like the case of the Mishna, and due to COVID, most of us are doing so from a fixed location. Yet through sharing these thoughts, from person to person, the sweet, profound and inspirational Torah of this sweet, profound and inspirational Torah leader and teacher is being carried over a long distance and reaching many different locations around the world.

Rabbi Sacks often referenced the idea, first outlined by the Bal Shem Tov and exquisitely explained by him in his book ‘Radical Then, Radical Now’ (or ‘A Letter in a Scroll’), that each of us are a link in the chain of the generations and a letter in the scroll of the divine Torah – such that each of us are crucial for the future of our people.

Yet in addition to that powerful image, this week I – along with countless other people around the world – have also come to realise that they are also a link in the chain of the Torah of Rabbi Sacks, and that through our learning and encounters with him, each of us have become bearers of letters of his scroll which, over the past few days, we’ve been sharing with others.

Rabbi Sacks once remarked that ‘there are times when the veil that covers the surface of events lifts, and we catch a glimpse of the larger pattern of which, unknowingly, we have been a part’ (Celebrating Life p. 36). On occasion, those times occur within moments of joy, and on other occasions within moments of grief. This week it has been the latter.