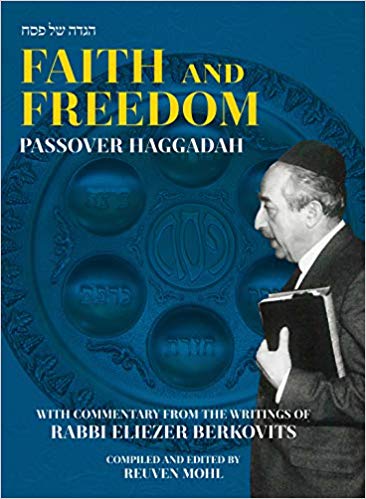 FAITH AND FREEDOM PASSOVER HAGGADAH with commentary from the writings of Rabbi Eliezer Berkovits, compiled and edited by Reuven Mohl. (Urim Publications, 2019)

A few weeks ago I received a copy of ‘Faith and Freedom’, which is a Haggadah with a commentary collated by Reuven Mohl from the various writings of Rabbi Eliezer Berkovits and published by Urim Publications.

For those less familiar, Rabbi Eliezer Berkovits (1908-1992) was an exceptional Jewish scholar, philosopher and theologian, whose books address some of the most important and challenging areas of Jewish thought and practice such as ‘Faith After the Holocaust’, the place of God in Jewish History, the nature of marriage and divorce, and the role of humanity in the development of halakhah, with boldness and creativity.

I have to admit that I generally avoid literary works that have been crafted by cutting and pasting excerpts from other literary works, because they presuppose the mindset of the author with reference to texts on which they never directly wrote a commentary. For example, while Rabbi Berkovits does make mention of slavery and redemption in his many writings, ultimately what has been presented as a commentary to Avadim Hayinu – for example – was not written by Rabbi Berkovits as a commentary to Avadim Hayinu. Given all this, Faith and Freedom should not work. Yet – in a way which is almost impossible to explain – it does, and on a very deep level too!

Naturally, much of the success of Faith and Freedom is due to the thoughtful compilation and editing of Reuven Mohl. At the same time, much is also due to the consistency and profundity of the themes expressed by Rabbi Berkovits throughout his writings.
On p. 32 of ‘Towards Historic Judaism’, which itself is quoted by Reuven Mohl as a commentary to the words ‘Blessed is He who gave the Torah to His people Israel’, Rabbi Berkovits writes that ‘the eternity of the Torah lies in being able to accept the challenge and to reveal new meanings from among those latent in the original Sinaitic tradition’.

In the same spirit, Faith and Freedom is a powerful expression of revealing new meanings to old passages and new pathways to familiar texts. For those already familiar with the teachings of Rabbi Eliezer Berkovits it will be a true pleasure to read, and for those who are not (yet) fully acquainted with his writings, it very much whets the appetite for more.

All those involved in the production of Faith and Freedom, and especially Reuven Mohl, should be praised for this wonderful publication.