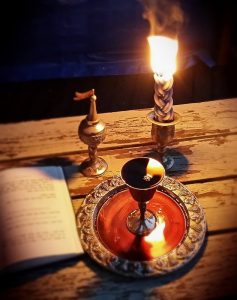 Almost all of today’s daf is concerned with one question – namely, the order of the Havdalah.
For example, Pesachim 103a begins by discussing the order of the Havdalah when Yom Tov begins on Motzei Shabbat, and it then proceeds to discuss a ‘regular’ Havdalah and whether the בשמים (spices) should be blessed and smelt prior to the נר (candle) being blessed and enjoyed.
Then, in Pesachim 103b we are told how Rava’s attendant lit an אבוקה (torch) prior to Havdalah, which is queried by Rav Yaakov bar Abba.
However, while – towards the end of Pesachim 103b – we are told that Rava, as is our common custom, recited four separate ‘havdalah’ distinctions (i.e. ‘who separates between holy and mundane, ‘[who separates] between light and darkness’, ‘[who separates] between Israel and the nations’, and ‘[who separates] between the seventh day and the six days of labour’, no rationale is given why these statements were made by Rava in this order.
Moreover, as R’ Yechiel Heller points out in his ‘Or Yesharim’ commentary on the Haggadah (as quoted by R’ Immanuel Bernstein in his ‘Meorei Tefillah’ p. 172), presuming (which he does, although many others do not) that reference is being made in the Havdalah blessing to the creation narrative, the order appears incorrect since the creation of light and darkness preceded the creation of the holy and the mundane.
Given this, I would like to offer a suggestion for the reason of this order which, like the Havdalah blessing itself, takes us on a journey of understanding and comprehension.
We begin with holy and mundane, and it is important to note that it is incredibly hard to clearly distinguish between holy and profane. There are things that can have the veneer of holy which are profane, and there are things that appear profane which are – in fact – holy.
Then, we are told about light and darkness – which we can individuate when they exist as separate experiences, but which we struggle to identify in terms of when one becomes the other (i.e. bein hashmashot).
Then we are told about Israel and the nations, who differ in many distinguishable ways (eg. food, festivals), but who are the same in many ways as well.
And finally, we are told about Shabbat and the rest of the week, whose very essence are essentially different.
Given all this, the blessings that we recite during Havdalah actually tell us an important lesson about the notion of ‘havdalah’ (distinctiveness), which is that while – as we part from Shabbat to start a new week – the distinction between Shabbat and the rest of the week is clear to us, there are many other aspects of our existence in the realm of holiness, personal clarity and Jewish identity, that are less clear to us. And thus we pray during the Havdalah that G-d grant us the understanding to know the difference – especially in those aspects of our life where Havdalah is less easily identified.
Go to Top