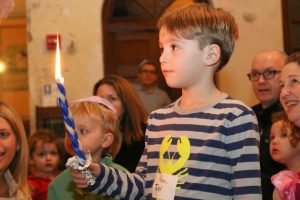 Today’s daf (Pesachim 106a) records how those who did not hear Havdalah on Motzei Shabbat may do so up until Tuesday afternoon. However, Rav Yaakov Bar Idi adds that in such a case, a ner (flame) should not be used, to which later commentaries (eg. Tur on Orach Chaim 299) have added that this is also the case vis-à-vis the besamim (spices). As Rav Yosef Karo explains (in his Beit Yosef commentary ibid.), this is because the function of both the flame and the spices ‘are purely to restore the soul which is pained by the departure of Shabbat, and this is not applicable in instances when Havdalah is not recited soon after the departure of Shabbat’. Still, pondering this rule presents us a curious halachic conundrum.
To give some background, there is a fascinating debate (see Sukkah 2b-3a and commentaries there) about the reason we encourage children under the age of bat/bar-mitzvah to perform mitzvot. Some argue that it is to train them in the mechanics of mitzvot, while others argue that it is to train them to love the mitzvot.
Of course, these two assertions are not mutually exclusive. Nevertheless, they do differ in the practical question of whether the mitzvot that we ask a child to perform must be halachically correct as if they were performing them at that moment as obliged adults. For example, if you want to train a child to wave the arba minim (four species) on Sukkot, must they use a kosher lulav and etrog? According to the argument of chinuch-as-training-for-mechanics-of-mitzvot they must, but according to the argument of chinuch-as-training-for-love-of-mitzvot, they need not.
Though the Mishna Berura records varying positions on this question (see his comments Orach Chaim 658), his overall conclusion is that the mitzvot that we encourage children to perform should be halachically correct (see Orach Chaim 657:1 and Biur Halacha there), and what this means is that ‘one may not give a lulav [whose tip has been broken off] to a child for the purpose of training’ (R’ Simcha Bunim Cohen, ‘Children in Halacha’ p. 4). In the same vein, children at the seder should be given sufficient quantities of matzah, marror and grape juice that would be sufficient to fulfil, at least on a minimum standard, the mitzvot as if they were adults (nb. all this is according to the ideal. However, as Dayan Weiss points out in his Minchat Yitzchak Vol. 9 No. 163:3, this is not required if this were to cause a financial strain on a parent).
I mention all this in light of a practice that I observed and experienced both as a young student and as a Cheder (Sunday school) teacher. In terms of the Cheder – which was attended by a wide range of children including both those who were religious and those who were not – the Headteacher would begin each assembly with Havdalah where not only did they – along with some children – recite the regular bracha on the wine, but they also did so for the ner (flame) and besamim (spices). Significantly, the Monday morning assembly at the primary school that I attended also did the same.
As previously noted, the general consensus is that children should perform mitzvot as if they were performing them at that moment as obliged adults, and if that is the case, then technically both the ner and besamim should not have been used for each Havdalah (since – as noted – Havdalah on a Sunday or Monday should not include a ner and besamim). At the same time, though the Havdalah was being recited on Sunday or Monday, it was being recited to remind students that it should have been recited on Motzei Shabbat (at which time both the ner and besamim are used).
As I hope I have shown, the question of rituals in chinuch is much more complex than meets the eye. But what I think in this case is that when the Headteacher performed the Havdalah with both the ner and besamim, they did not just do it for the present (for the children to fulfil the mitzvah of Havdalah), or even just for the past (for the children to know how Havdalah should have been recited on the previous Motzei Shabbat), but also for the future (for the children to know how to conduct Havdalah when they get older). And if that is the case, it is perfectly understandable why they also used the ner and besamim as well.
Go to Top