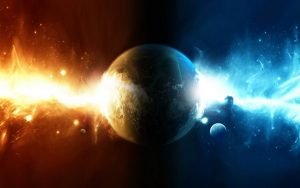 In order to make sense of today’s daf (Pesachim 110), we must begin by taking a moment to reflect on the theology of dualism – the Zoroastrian belief that there are opposing forces of good and evil within the universe – each aided by an army of demons.
As Rabbi Sacks explains in his book ‘Not in God’s Name’, ‘it is not easy to see God as the source of bad as well as good, judgement as well as forgiveness, justice as well as love’ (Not in God’s Name p. 53). Given this, as Jeffrey Russell observes, dualism ‘denied the unity and omnipotence of God in order to present his perfect goodness’ (see Not in God’s Name p. 48).
But while dualism was a belief held by a number of small sects, including those who wrote the Dead Sea scrolls found in Qumran, over time the theology of dualism began to influence and spread into other faiths. As such, ‘dualism entered Judaism and Christianity when it became easier to attribute the sufferings of the world to an evil force rather than to the work of God.’ (ibid. p. 49).
Having explained this, we can now turn to a Beraita found in yesterday’s daf (Pesachim 109b) which itself lays the foundation for much of the discussion found in today’s daf. There we are taught that, ‘a person should not eat or drink in pairs’ (i.e. they should not eat two distinct portions of the same food, or drink two cups of the same beverage) – which various commentaries understand to be a teaching highlighting the Jewish sensitivity towards adopting the theology of dualism.
However, such a sensitivity becomes a problem for seder night when we have 4 cups of wine. Thus, the question addressed by the Gemara is how can we reconcile the sensitivity towards dualistic beliefs, with the practice of drinking four cups of wine on Pesach? In response to this question, the Gemara offers three different answers: Firstly, seder night provides its own special protection from slipping into these faulty beliefs. Secondly, because one of the cups of wine accompanies the recitation of Grace After Meals which teaches us about the role of God in this world, this helps ensure that the four cups are not interpreted as representing dualistic beliefs. And thirdly, the four cups are not necessarily two pairs. Instead, they are – at least in some way – four separate and distinct cups of wine, and therefore there is nothing to worry about.
Having reconciled how our practice of seder night need not be interpreted to be reflective of dualistic tendencies, today’s daf (Pesachim 110a) proceeds to inform us of the practices of various Babylonian Amoraim who were sensitive to the rule of ‘pairs’ and who avoided eating and drinking in pairs. This is because dualism was a strongly promoted theology in Babylon at the time.
Contrasting this, we are told (in Pesachim 110b) that the Amoraim living in Israel לא קפדי אזוגי – ‘were not particular in regard to pairs’ – meaning that by this point in time, dualism was a less known and less popular belief in Israel. What we learn from here is at least some of the rules established by the Rabbis were established in response to trends and beliefs which existed at the time, and that variations between communities can be explained in light of the prevalence of those trends and beliefs.
However, before concluding, I want to return to the insights of Rabbi Sacks on dualism – because there is much in what he says about the tendency towards dualism which is highly relevant for contemporary Judaism and the modern world.
As Rabbi Sacks observes, dualism is a way of finding a simple answer to complex questions. But as he asks, and then proceeds to address, ‘what if monotheism requires the ability to handle complexity?’ (ibid. p. 53).
Today, while few Jews speak the language of dualism, there is unfortunately still a tendency within our community to provide simple answers to complex questions. As Rabbi Yehuda Amital once wrote while reflecting on Israeli society, ‘simplistic thought – seeing issues as black-and-white, and an inability to perceive a whole and complex picture – has become a national epidemic. The media continually broadcast simple and uncomplicated message [and] there is no time for involved explanations which require more air-time… A situation has been created whereby simplistic thought has not only gained legitimacy but has become the accepted language’ (Commitment and Complexity p. 8). In response to this, he explains that it is important that we ‘fight against superficiality and understand the complexity of the world’ (ibid.).
Overall, while ‘it is not easy to see God as the source of bad as well as good, judgement as well as forgiveness, justice as well as love’, monotheism requires complex thinking, and instead of seeking simple answers to hard questions, monotheism demands hard answers to hard questions. At the same time, a person of faith must never forget that there will always be questions about God which we – as humans – are not fully able to answer.
×
×