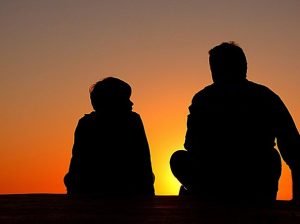 Whenever we read a written record of spoken words, it should be clear to us that a dimension of those words is missing. This is because part of the interpretation of spoken words is communicated by the tone and inflection of the speaker – which are not often expressed in the written record of those words. As such, while hearing the speaker directly would likely leave us with little doubt about what they wish to be saying, it is possible to interpret a written record of spoken words in a range of different ways.
Today’s daf (Pesachim 113a) provides a good example of this when we read what Rav – a hugely important Amora – said to his son Ayvu when he came to the conclusion that Ayvu was not suited to the form of rigorous Torah study that Rav wished him to engage in. In response, Rav said: טרחי בך בשמעתא – “I have placed much effort in [helping you succeed with your Torah] studies”, ולא מסתייע מילתא – “but these [efforts] have not been successful”, תא אגמרך מילי דעלמא – “come, let me teach you some aspects of the world [of business]”.
Reflecting on these words, the question I would like to ask is: what tone and inflection did Rav use when speaking with Ayvu? Did Rav communicate frustration and disappointment because Ayvu had not realised Rav’s expectations that he would become a Torah scholar? Or did Rav simply communicate the fact that it seemed to him that Ayvu was not suited to rigorous Torah study?
Having been a high school teacher for many years – where I have had countless conversations with parents and students at parents’ evenings – I can attest to the fact that different parents (and similarly, different teachers) can say almost the exact same thing to a student, but in one instance, the tone and inflection can quite literally crush a student, while in another, the tone and inflection can help them appreciate and navigate where their strengths lie. In this case, we cannot fully know what was Rav’s tone, but I would like to think that it was the latter.
Applying this conversation to today, Rabbi Yitzchak Zilberstein (Chashukei Chemed on Pesachim 113a) was recently asked to address a question where a father had invested much money over many years for his son to grow to become a Torah scholar. However, like Ayvu, the son did not succeed in realising the vision of his father, at which point the son expressed an interest in learning a trade. However, the father then refused to support his child’s endeavour. The question addressed by Rabbi Zilberstein was whether the father was justified in doing so?
While it would be possible to offer a range of sources to address this question, Rabbi Zilberstein based his answer directly on this story – to which he then added that whether the son was unsuccessful in his studies because it simply did not suit him or even because he did not put sufficient labour into his studies, this does not exempt a father from his duty of ensuring that his son learn a trade.
Ultimately, every parent has hopes and dreams for their children, and it is therefore understandable why some parents hope and dream that their child(ren) will follow in their professional footsteps. But while this may be understandable, this does not make it right, and the personal, emotional and psychological cost of such a blinkered view is profound.
True – children need to listen to their parents. But equally true is that parents need to listen to their children; they need to listen to their child’s challenges and pay attention to their individual hopes and dreams. In fact, only by listening to who their child truly is can a parent can be a true parent to that child.
Finally, messages are communicated not only by words but also by tone and inflection, which is why a parent must consider what they are communicating not just in their words, but also along with their words, which will make all the difference in terms of how a child feels about the choices they make in life.
Go to Top