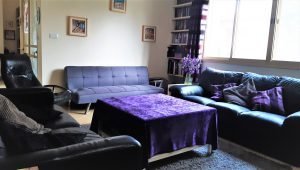 Towards the end of today’s daf (Pesachim 115b) we are informed that early on in the Pesach seder, the table of the seder leader is removed (nb. this refers to a time when each person ate from a small tray-like table, whereas today, since most of us generally conduct a seder around a single table*, a comparable action is performed by removing the Seder plate, along with the Matzot, from the table – see Shulchan Aruch 473:6). As the scholars of Rabbi Yannai’s academy explain, this is done so that the children should notice something unusual and be stimulated to ask questions (nb. Devarim 6:20 informs us that the Exodus story should ideally be passed on to younger generations in response to the questions that they ask).
We are then told that when Abaye was younger and was sitting at Rabbah’s seder, he saw how, early on in the Pesach seder, Rabbah’s table was removed, to which Abaye responded (and here I paraphrase): ‘Why are you removing the table which is laden with food and matzah? We’ve not yet started to eat!’. At that moment, Rabbah turned to Abaye and said, ‘you have exempted us from asking the Mah Nishtana [questions]’.
To understand this exchange, it is necessary to explain that the Mah Nishtana – i.e. the four questions that are asked on seder night about why we aren’t eating Chametz and are just eating Matzah; why we eat the Marror; why we dip the food, and why we lean – are understood by many commentaries to be mere examples of questions that should be asked on seder night, and that – ideally – participants of a seder should be stimulated to ask their own questions. This is how Rashbam understands the exchange between Rabbah and Abaye which means that by asking this question – Abaye ‘exempted’ those present from needing to read and ponder the questions of the Mah Nishtana.
A different approach is offered by Tosfot who assert that it is important to address the four topics mentioned in the Mah Nishtana. Still, Tosfot does not seem to be insistent that we recite the precise words found in the Mah Nishtana. Accordingly, Tosfot understands Rabbah’s reply as words of encouragement for Abaye to ask further questions about what is different including questions relating to the Matzah, the Marror, the dipping and the leaning.
Interestingly, Rabbi Yaakov Moelin (1365–1427), otherwise known by the acronym Maharil, records (see his Minhagim on the Seder HaHagadah) that his father-in-law Rabbi Moshe Katz once related to him how, many years beforehand, his daughter Leah (who was to become the Maharil’s wife and who herself was a great Torah scholar – see the responsa of the Maharil No. 75) asked her father why he was removing the seder plate before beginning the meal. Given Leah’s question, her father did not require that the Mah Nishtana be read. Instead, as per the Rashbam’s approach, he began his response to her question with the words of Avadim Hayinu.
What we learn from all this is that while seder night is a night of questions, it need not be – and should not be – a purely scripted night of questions. True, the Haggadah provides us with important teachings and messages which we should read, ponder and discuss. At the same time, it is important that the seder night also creates sufficient opportunities for spontaneous questioning and discussion.
In conclusion, I would like to share a beautiful insight which I read some years ago about why the Exodus story is told through question and answer as summarized by Rabbi Harvey Belovski (Hamaor, April 2003 p. 11) who, having noted that we are meant to re-experience the Exodus on seder night, observes how ‘the great Rav Tzadok HaKohen of Lublin notes that in order for this principle to be fully realised, the Exodus must occur in every dimension of the personality…[including] the intellect. The exile-to-redemption experience of the Exodus is played out in the intellect through the process of identifying and expressing a question and then answering it. When one identifies a question, one feels a lack of knowledge – a state to which Rav Tzadok refers as the exile of the intellect, for exile on the physical plane is the awareness of imperfection and inadequacy of experience that needs correction. [Similarly], expressing the question (and hence desiring a response) parallels the yearning for deliverance, while receiving the answer is the redemption of the intellect, as the original knowledge-deficiency is now rectified, which is analogous to the ecstasy of physical emancipation and the fulfilment that it brings.’
* nb. In terms of our practice, until the Matzah, Marror and Charoset is eaten, we conduct our Seder while sitting on the couch with a small table nearby (see accompanying picture) – which not only provides a more comfortable setting for the telling of the Pesach story, but it also allows us to more easily relax and lean in a manner of freedom when drinking the cups of wine, and also provides a further stimulus for the children to ask more questions.
×
×