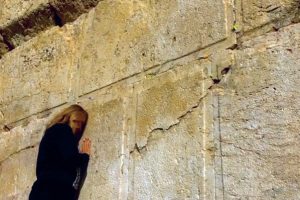 We often think of Hallel as merely being a collection of joyous songs of praise. However, today’s daf (Pesachim 117a) informs us that – at least the specific section of Hallel starting with the words לא לנו (“Not to us, Lord, not to us, but to Your name give glory…” – Tehillim 115) – was recited not just during times of celebration, but also in moments of great worry and fear.
According to Rabbi Eliezer, these words were sung בשעה שעמדו על הים – when Bnei Yisrael stood by the sea. According to Rabbi Yehuda, they were sung בשעה שעמדו עליהם מלכי כנען – when the kings of Canaan stood against Yehoshua and Bnei Yisrael (see Yehoshua Ch. 9). Rabbi Elazar HaModai teaches that they were sung בשעה שעמד עליהם סיסרא – when Sisera stood against Devorah and Barak (see Shoftim Ch. 4). Rabbi Elazar ben Azariah taught that they were sung בשעה שעמד עליהם סנחריב – when Sancherib stood against Hezekiah and his company (see Melachim II Ch.’s 18-19). Rabbi Akiva says that they were sung בשעה שעמד עליהם נבוכדנצר הרשע – when the wicked Nebuchadnezar stood against Hananiah, Mishael, and Azariah (see Daniel Ch. 3). While Rabbi Yosi HaGalili states that they were sung בשעה שעמד עליהם המן הרשע – when the wicked Haman stood against Mordechai & Esther (see Esther Ch. 3). What this teaches us is that the words of Hallel speak to occasions when we turn to God while courageously standing up and facing up to the people and situations that scare us, as well as to occasions when we turn to God in praise for the times when we are relieved and redeemed from those threats.
As I’ve previously written, we often turn to God in times of trouble, but we are much slower to do so in times of celebration. Given this, I am moved by the idea that Hallel has this dual identity whereby it can be, and it has been, sung both during times of צרה (anguish) as well as in times of גאולה (redemption).
On this theme, I would like to mention a brief story and a stirring insight found in Rabbi Krohn’s ‘In the Spirit of the Maggid’ (p. 145) where we read of two men, who had chosen to meet together by the Kotel, became distracted by the intense weeping of an older gentleman whose face was leaning against the kotel.
Wishing to help, and given that each had significant resources at their disposal, they approached the man and said to him, “we are so moved by your prayers. Is there anything we can do to help you?”, to which the gentleman replied, “thank you for your kindness but everything is fine, I don’t need anything.”
Thinking that the man was merely being shy, they asked once more: “Please let us help you. We will do anything we can”, to which the man answered, “Baruch Hashem, I am a blessed man. Everything is wonderful.”
Curious, one of them then asked, “why then, may I ask, were you crying and davening like that?”, to which the man then replied, “Last night my wife and I married off our 10th and youngest child. I came here tonight to thank the Ribbono Shel Olam for allowing us to live and see this great occasion. I was praying for no other reason than hakarat hakov (appreciation).”
As Rabbi Krohn proceeds to explain, we find in Tehillim Ch. 116 that David HaMelech prayed with the same intensity of thanking Hashem for the good and salvation as he did when he prayed when things in his life were difficult, and as such, perhaps we should be spending more time and intent saying the Modim (Thanksgiving) part of the Shemoneh Esrei, as we do when saying the Shema Koleinu (Hear our Cries) part where we ask for our needs.
Of course, this year has been very difficult for very many people. But what we learn from today’s daf is that the songs that we use for praise can be used to cry out when we face difficulties, and what we learn from the story is that just as we turn, call and cry out to God during times of anguish and hardship, so too, should we call and cry out to God in acknowledgement and thanks for our blessings.
×
×