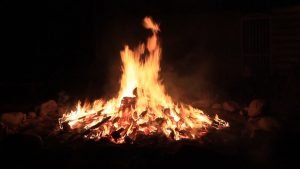 There is a rule, as derived from Devarim 12:4, that we may not destroy the name of God which is why we therefore either put aside (‘geniza’) or bury (‘kevura’) sacred writings containing the name of God that become unfit for use. However, while Sifrei Torah, Tefillin, Mezuzot must be treated in this manner, other Torah writings such as newspapers containing Divrei Torah do not have the same level of sanctity and do not require this type of treatment. Given this, it is considered improper for these items to be mixed with these higher-level writings (see Teshuvot VeHanhagot 3:324) and put aside or buried together – notwithstanding the fact that both will be disposed of in one way or another.

I mention this because today’s daf (Pesachim 14a) addresses a similar question relating to the disposal of meat and oil which became spiritually contaminated, and it considers whether these items may be burnt while – at the same time – bringing them in contact with a more severe level of spiritual contamination.

Though the Gemara spends much of the coming dapim addressing this question, especially as it applies to chametz of terumah, the rulings of both Rabbi Chanina Sgan HaKohanim about sacrificial meat, and that of Rabbi Akiva about oil of terumah, indicate that this may be done. But why? Why is it possible to upgrade the spiritual contamination of meat and oil that is about to be destroyed, but we are still told not to mix Torah writings with different levels of sanctity even though both will be disposed of?

The answer, I would like to suggest, is that the act of geniza/kevura is itself an expression of the level of holiness of the specific physical text being put aside or buried as defined by the name/s of God used in those texts and the manner in which they were originally written/printed, while the act of burning spiritually contaminated foodstuffs is a necessity which emerges from it being a type of product requiring this act, but is not related to the specific physical qualities of that product. Given this, though there is a spiritual sensitivity involved in protecting foodstuffs from spiritual contamination, this is seemingly overridden – at least in these two cases – when both will imminently be destroyed.

Overall, what this debate teaches us is that while, in some instances, Jewish law is outcome oriented and therefore accepts certain compromises to achieve a particular goal, Jewish law can also be highly categorical and this is why, in other instances, such compromises may not be made.