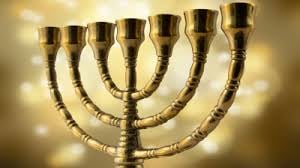 A central element of the Chanukah story is that the oil that was used in the Beit HaMikdash was spiritually tainted by the Syrian-Greeks. This point is made in Gemara Shabbat 21b which informs us that they טמאו כל השמנים שבהיכל – meaning that they deliberately rendered all the oil in the sanctuary to be spiritually impure, and underpinning this entire episode is the presumption that oil can be מקבל טומאה, meaning that it is susceptible to spiritual impurity.

However, the last lines of yesterday’s daf and the first lines of today’s daf (Pesachim 16b-17a) make reference to a fascinating exchange – as recorded in Chaggai 2:12-13 – between the prophet Chaggai and the Kohanim who returned from Bavel to rebuild the Beit HaMikdash, which suggests otherwise. This is because upon being asked whether oil can be מקבל טומאה from being in indirect contact with a טמא animal, the Kohanim responded ‘No’.

Significantly, Rav is of the opinion that these Kohanim erred and that their answer should have been ‘Yes’, while Shmuel believed that they had not erred, although as the Gemara continues to probe the question that Chaggai asked the Kohanim, it becomes evident that it was a far more complex query than whether oil can be מקבל טומאה in all cases, and that at least according to Rabbinic law (מדרבנן), oil is מקבל טומאה.

Still, according to Rabbi Yaakov Emden (Mor U’Ketzia 670) and numerous other Torah scholars, the very fact that such oil is not biblically prohibited challenges our entire understanding of the Chanukah story, and given this, why – at a time of extreme spiritual duress – was a seemingly stricter-than-necessary position taken on the question of whether the remaining oil could be used?

To answer, we must distinguish between prohibited טומאה arising from association with the dead, and a different category of טומאה which, though technically permitted at the time, was treated more severely, namely עבודה זרה – idolatry (nb. on this point, see Rav Neventzahl’s ‘Yerushalayim BeMoadeha: Chanukah’ p. 27).

We often think of the searching for the oil in the Beit HaMikdash as a pursuit for oil that was halachically valid. But this is not the case, as halacha alone would have permitted the use of the remaining oil. Instead, it was a rejection of idolatry and associations with idolatry which, in an age and in a community battling idol worship, was a greater טומאה than any spiritual impurity that came with an association with death.

In my commentary to Pesachim 9a I spoke about Emunah and Halacha, and I quoted Rabbi Yehuda Amital who, in an essay penned in 1996, remarked that ‘we live in an era in which educated religious circles like to emphasize the centrality of Halakha…[but] to my mind, this excessive emphasis of Halakha has exacted a high cost. The impression created is that there is nothing in Torah but that which exists in Halakha, and that in any confrontation with the new problems that arise in modern society, answers should be sought exclusively in books of Halakha. [As a result of this], many of the fundamental values of the Torah which are based on the general commandments …have also lost their validity in the eyes of a public that regards itself as committed to Halakha’ (Commitment and Complexity p. 48), and reflecting on all the above, it is important to note that were the decisions that were made in the overturned Beit HaMikdash to have been rooted purely in halacha, then the Chanukah miracle would not have occurred and we wouldn’t be celebrating the Chanukah today.

As those of you who read my writings know, I am passionate about the study and teaching of halacha. But as I hope all of you also know, this is not the sum total of how I see and live Judaism, and in terms of Chanukah, it is important to understand it as a festival rooted in Emunah – faithfulness in God – where a choice was made to show our loyalty to God and reject associations with idolatry, notwithstanding the fact that a compelling halachic argument could have been made that would have justified using the tainted oil.

Ultimately, the existence of Chanukah as a festival today serves to teach us about the rejection of idolatry and the need for us to be loyal to both our Torah laws and our Torah values, while at the same time, bringing light and illumination to the world.